On Wednesday, March 23rd I attended CT’s Home Educator’s Day at the state capitol eager to get a glimpse into the illusive world of homeschooled students.  Even as an Educational Studies major at Trinity College I do not often encounter or interact with homeschooled students or those educating them.   The event was organized by families and organizations across the state, including The Education Association of Christian Homeschoolers (TEACH), Connecticut Homeschool Network (CHN), and the National Home Education Legal Defense (NHELD).   I was eager to speak with individuals from all three groups or at least gain some information on their motivations, why there is such a large christian homeschool presence, and (as many of them had experience with the public school system) why they now actively advocate for homeschool instead of, for example, public school reform.

The day persisted was scheduled into several events which included meeting with legislators, presentations by homeschoolers, and activities for the children attending.  I arrived during the “displays and presentations” portion of the day, where different organizations, families and homeschool networks were presenting their work and achievements as well as advocating and pitching homeschool to those who may be interested or on the fence.   There were about 10 displays, most of which belonged to a christian homeschool network known as Classical Conversations or TEACH, another christian faith based homeschool organization.  Several of the other displays belonged to a caterer distributing free cookies (to show appreciation/spread awareness for homeschooling), the CT Homeschool Network, and NHELD who were distributing information on homeschoolers’ rights and how to handle social workers if you should encounter one.

The women working the Classical Conversations table were the first to approach me. Most of their displays were filled with art or science homework and projects completed by homeschooled children or teens.  I explained that I am an Educational Studies major at Trinity College interested in learning about homeschool, but because I was eager to hear their sales pitch, I also explained that I am a parent with a child who will be of kindergarten age next year.   Both of the women I spoke with had been homeschooling for 7 years, and their children had never been to public school.  Why homeschool? I asked.  Their responses were intertwined with their faith based motivations.  They wanted a “more realistic” and domestic experience for their children than public school provided, and  also to cultivate good morals.   When I asked how the faith based approach influences their curriculum, one response was: “We do teach science, but we also teach that God created us, he is the center of the universe.  We recite the 10 Commandments every day.  Stuff like ‘thou shalt not kill’, we do that every morning.”  She also explained that they educate their children at home every day, and meet collectively through the Classical Conversations network once a week to discuss progress and catch up.  The women explained that they receive some training through the network through home-educators workshops, and that they are encouraged to purchase curriculum materials via the Classical Conversations organization.  My final question for the women was how a low income family with two working adults or even a single parent family could afford to homeschool their child, the women I spoke with did have admittedly biased responses as they both had husbands who worked full time for livable wages while they stayed home to homeschool their children “You just make it work, I guess” was the response of one woman, the other nodded in agreement.  I thanked them for their time and information.

Because I arrived during the displays portion of the day, I unfortunately was not able to speak with a legislator about recent accomplishments of homeschoolers.  Through some brief research, though, I discovered homeschool is on the rise.  Homeschool is legal across all 50 states (though some do have different laws/regulations) and by 2011, roughly 3.4% of all school-aged children were homeschooled.  Connecticut alone is estimated to have about 24,000 homeschooled students.  While Connecticut’s numbers are not unique (many states also estimate this number of home-schoolers), more populated states such as California and Florida record an estimate of between 100,000-200,000+ students electing homeschool over public or private institutions.  I am grateful to have been able to attend Connecticut Homeschool day at the state capitol to learn about home-educators as well as for the information I was graciously provided by representatives of Classical Conversations, TEACH, CHN, and NHELD. 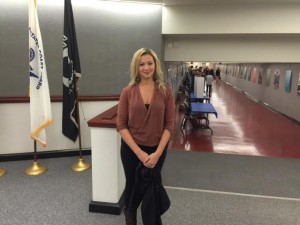 In the Concourse Lobby with Displays by Homeschoolers and organizations behind me.