“If we teach today’s students, as we taught yesterday, we rob them of tomorrow.” – John Dewey 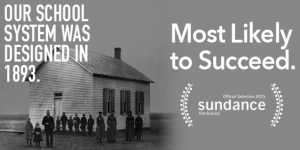 On April 6th, the Capital Community College in Downtown Hartford hosted a small screening of the educational documentary, “Most Likely to Succeed.” This documentary, directed by Greg Whiteley and produced by Ted Dintersmith, debuted at the Sundance film festival last year, and has since gone on to be shown in over 2,000 schools across the country. The film offered an interesting perspective on the current traditional schooling system and it’s desire for change.

124 years ago the Committee of Ten, a group of educators, came up with a standard set of subjects they felt every student should know. This system of education began in 1892, and still today in 2016, it has not changed. There is something alarming about this notion- that students today are still learning what was put into place over a century ago, despite the drastically changing times. The problem with the traditional method of teaching is that every student learns differently. Kids who are excited about a certain topic will learn it better.

This is where Larry Rosenstock came in. He had a vision of what schooling should become, and developed a school unlike any other- called High Tech High. Located in San Diego, this school centralizes around the idea of project based learning. This means there are no written exams, no class periods or subjects, no bells, and no textbooks. Instead, teachers are on a one year contract and can simply teach whatever they want, whenever they want too. In place of a final exam that normally forces students to memorize and cram information onto paper, at this school there is an end of year exhibition where parents, friends, and teachers alike come to publicly view the student work in an open forum.

One of the biggest misconceptions of the traditional model of school is that the more information one can gain, the more knowledge he or she will have. However, this is wrong. According to a supporter of High Tech High, “Content is ubiquitous, it’s free.” We can merely Google things nowadays, we don’t need to learn to memorize unnecessary things. High Tech High instead focuses on implementing what they call “Soft Skills.” These non cognitive traits include critical thinking, asking questions, collaborating with a team, time management, and work ethic. The traditional school curriculum we have now doesn’t actually teach children to learn, it just teaches them to memorize. In a study done at the Lawrenceville School, a class of students were asked to re-take their Science final 3 months after it was over. After doing so, their grade average dropped from a B+ to an F, showing that there in fact was no retention of the material because all that mattered to them at the time was the letter on their report card.

Parents of students at this “new” type of school have expressed their concern for straying from the traditional curriculum. They fear that the lack of structure will hinder their children’s preparedness for standardized tests such as the SAT/ACT and hurt their chances of attending good colleges and universities. As producer Ted Dintersmith said, “We’re a nation obsessed with numbers.” All anyone cares about anymore are quiz grades, report cards, and SAT scores, when in reality that doesn’t guarantee anything in life. Students need to follow this new type of education that teaches them about “work and citizenship readiness.” The things that will matter in the so called real world. High Tech High and the new method teach kids to learn through doing. Students work with a sense of purpose here.

The goal of this riveting documentary is to show that education is not something that can be standardized for everyone because at the end of the day, this ignores the fact that education is about people, and no two learn the same.

After the film was over, there was a Q&A session with a panel of three poignant individuals: Superintendent of Hartford Public Schools- Beth Schiavino-Narvaez, Producer of the film- Ted Dintersmith, and Executive Director of the CT Association of Public School Superintendents- Dr. Joseph Cirasuolo. Superintendent Narvaez was asked what innovations will be implemented here in Hartford schools, to which she responded that there are currently three High school centers of innovation where kids can do real, meaningful, hands on work. The first school is project based, the second is mastery based, and the third is blended learning. Furthermore, the Montessori schools all focus on independent learning as well, where kids get to chose what they want to work on. One challenges she faced in trying to create innovations in these existing schools was learning to change as a leader and educator. Instead of feeling that there was no backbone to the curriculum, she learned simply to place the foundation down for student success and stabilize the educational system in order to help cultivate student innovation in Hartford schools.

To learn more about the documentary, and the Most Likely to Succeed campaign initiatives, check out: http://www.mltsfilm.org