On Wednesday, April 6, 2015 court proceedings continued before the Hartford Superior Court regarding whether Connecticut schoolchildren receive an adequate and equitable education in CCJEF v. Rell. The Connecticut Coalition for Justice in Education Funding (CCJEF) argues that they do not because of the state’s funding formula, which favors property-rich districts. CCJEF seeks to protect the interests of all schoolchildren, and today’s court proceedings surrounded English learners (ELs).

The defense attorney questioned Megan Alubicki Flick, the English as a Second Language (ESL)/Bilingual Consultant for the Connecticut State Department of Education. One of her responsibilities include conducting site visits to schools and districts to ensure the needs of EL students are met. Her testimony explained who an EL is, how one is identified, and how districts accommodate them.

An EL is defined as a student lacking sufficient access to the curriculum. Spanish speakers constitute 72.4% of ELs in the state. According to Flick, approximately 95% of the programs provided for ELs in the state are Spanish programs.

When a student first enters a district, they are administered a Home Language Survey, which screens for language dominance. The survey also determines the language spoken at home, the language first acquired by the student, and the language the student predominantly speaks. It also concludes if a student meets English language proficiency.

Students can participate in a transitional bilingual program for up to thirty months, after which they can request the State Department to extend their participation by up to another thirty months. However, there is no restriction on bilingual English programs.

Of the three, transitional bilingual programs are used the most, with thirty-five districts providing them in at least one school. To have such a program, the district must report that at least twenty students speak the same non-English language in one school building before Oct. 1. If it is reported after Oct. 1, then the program is implemented the following school year to provide sufficient time to develop the program’s details.

According to Flick, “Schools are an extension of the districts’ responsibilities.” Her statement indicated accountability for ELs’ education fell predominantly on school administrators and teachers. School districts are responsible for implementing large-scale plans. This includes conducting Home Language Surveys (which screen for students’ language dominance); identifying, placing and serving ELs; ensuring high-quality instruction for ELs; and classifying and reporting ELs to the State Department of Education.

Judge Thomas Moukawsher asked Flick, “In Connecticut are these items being fulfilled?” referring to the pages long list of districts’ responsibilities.

Flick responded, “Some districts do more, some do less.” She went on to discuss how districts have varying numbers of ELs and that over 160 languages are spoken in Connecticut. Ultimately, she said, districts do fulfill basic standards. Whether such basic standards are sufficient will be addressed by the court’s ruling. 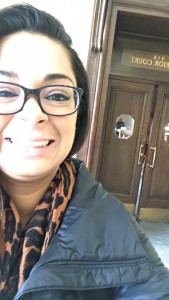