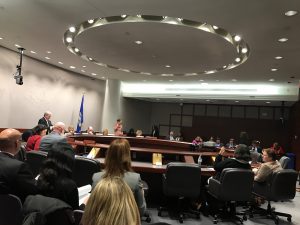 After a Connecticut baby suffers severe abuse and moves from home to home, the Connecticut Children’s Committee meets on the subject of Connecticut Department of Children and Families’ practices.

The Committee on Children met on Tuesday, February 14, 2017 at 1pm in the Legislative Office Building at the Capitol Building in Hartford. The meeting commenced with a greeting and opening remarks by Senator Leonard Suzio. He proposed the bills to be drafted in this meeting. Proposed S.B. No. 396, an act concerning child fatality and S.B. No. 397, an act establishing an independent department of children and families ombudsman were passed without discussion. S.B. No. 6099, an act concerning the operation of group homes maintained by the department of children and families, and S.B. No. 6279, an act concerning voluntary placement in the custody of the department of children and families and parental rights were also passed without discussion. There was a short recess following these bills due to a technical issue.

After the passage of these bills, Senator Suzio gave the floor to Sarah Eagan of the Office of Child Advocates (OCA). Eagan presented on the Connecticut Department of Children and Families (DCF) case regarding “Baby Dylan,” who sustained various severe injuries while in foster care. A hospital visit and suspicions of abuse and neglect led to an investigation in January of 2016.

In the year 2015, when Baby Dylan was thirteen months old, he was placed into the foster home of a relative: his mother’s cousin. Five months later Baby Dylan was placed into another relative’s home. They immediately brought him to the hospital due to physically malnourished appearance. Eagan stated that Baby Dylan suffered from, “nutritional neglect and abuse, with numerous injuries including broken bones, burns on wrist, bruises and abrasions, and bleeding into his brain.” The child was described as being severely emaciated, unable to walk, talk, or feed himself, and only weighing seventeen lbs. Eagan discussed how his deteriorating condition should have been obvious to his care givers, but because of alleged substance abuse and a pattern of neglect, his conditions were ignored. The OCA then opened their investigation.

The investigation revealed “severe flaws” in DCF’s practices according to Eagan. Investigators discovered that during social workers’ home visits with Baby Dylan, there was a period of 100 days from the summer through fall where the social workers were unable to make contact with Baby Dylan who was “sleeping.” Eagan said that DCF committed, “numerous failures including forged document work in “Link,” unresponsiveness to red flags, and multiple conflicting statements around the foster parents.” There was serious cause for concern about social workers’ caseloads, citing too much to do and not enough staff to do it. By DCF policy, people who work on a case must enter information within five days of meeting with a family. The OCA noticed that eighteen out of twenty-one entries into the “Link” electronic licensing records for Baby Dylan were dated November 12th — one day after Baby Dylan was hospitalized.

Eagan concluded her presentation by arguing that the state strongly supports placement with families when they are clearly demonstrating capacity to meet the needs of the children. However, after reviewing this case and the DCF’s failures, the OCA recommends amending state law to require DCF to create standards for the role of the agency in assessing where the child is placed, making sure that it is a safe environment. After Eagan finished presenting, Senator Suzio asked a few clarifying questions regarding her presentation. Eagan answered them and emphasized her desire to increase the safety standards for children in Connecticut foster care. 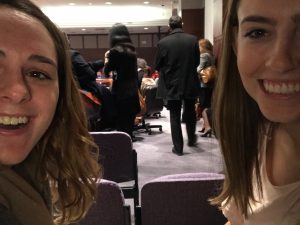