This clip from Waiting For “Superman”, is crucial to understanding the movie and the education system. To understand the public education system we must understand that the inequalities, and how complicated they are to amend. To understand how the public school system works, we must know that although they are partially federally funded, the state sets up its own rules, that are generally conflicting. This makes school governance challenging because of all of the different rules set up by the state, federal government, or local school boards. These boards and rules were initially created to help schools, but now are apart of the problem which hinders schools. Jonathan Alter, of Newsweek, stated “this whole collection of people, which is sometimes called the ‘blob’.. has been an impediment to reform. No individual is necessarily to blame, but collectively, they are the Goliath of the system.” The image coinciding with Alter’s quote is an image of a teacher attempting to fill her students with knowledge, but instead they miss due to rules and regulations. 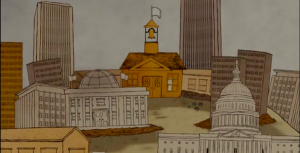 Kahlenberg and Potter would respond to this scene with agreement that the rules and regulations set up in the public school system do not help students. In Alter’s comparison, he is point out that the ‘blob’ is essentially Goliath. In this sense, I believe Kahlenberg and Potter would see the teachers as the David, who has still not won victory. The weapon that teachers might use to beat Goliath would be teachers unions.