On February 14th, a public hearing about children was held at Connecticut state capitol. The meeting started at 13:10. While I was hearing in ninety minutes, committee members discussed two bills.

The first bill, Proposed S.B. No.453 AN ACT ESTABLISHING THE OFFICE OF THE CHILDREN AND FAMILIES OMBUDSMAN, was introduced by SEN. FASANO, 34th District and SEN. WITKOS, 8th District.

They convened that the general statutes be amended to designate an independent ombudsman to receive and review complaints and grievances from children in the care and custody of the Department of Children and Families and maintain a record of all complaints and grievances, including descriptions of investigations, findings, recommendations and agency responses, which record shall be made available to the Child Advocate and, when appropriate, the Connecticut Juvenile Training School advisory group.

The purpose is to establish independent children and families ombudsman to provide children in the care and custody of the Department of Children and Families an opportunity to have complaints and grievances heard, reviewed and addressed.

Rep. Linehan asked a question, “How many clients satisfied?” Sen. Witkos replied, “We didn’t collect these statistics.” Later he mentioned, “We picked up 1271 phone calls in 2018, and 470 requires were from 130 families.” It shows plenty of complaints exist, and a large number of children need the Department of Children and Families and ombudsman to pay more attention and take care. “Pick up the phone, and let people tell their stories.” Sen. Witkos said.  The last simple question from Rep. Linehan was, “Who is your aiming for your department?” The answer was, “Kids” said by Sen. Fasano. In the end, Rep. Linehan said to Sen. Fasano and Sen.Witkos, “We will make an appointment later for further discussion.”

That the general statutes be amended to require camps to conduct background checks on overnight camp counselors, like fingerprints and criminal records. Rep. Lanoue expected to have a check on every counselor. But, it takes two to three months to collect fingerprints, which is too long. To shrink the time expending, the organization will spend a huge amount of money. Rep. Lanoue said she has two folds for this. The first one totally supports to collect fingerprints. The second one is it costs too much.

A question asked by Rep. Kokoruda, “Who is required to do that, school, parents?” “That” here means collecting fingerprints and checking backgrounds. Rep. Lanoue answered that everyone wants children to have a safe environment and summer camp. She also mentioned, “Some nonprofit organizations raised money to do it (collect fingerprints).” In this bill, collecting fingerprints is the keystone instead of discussing check on criminal records because collecting fingerprints is the most money-consuming part. A male representative agreed with Rep. Lanoue and said, “We all want our children to have a safe environment and qualified adults.” At the end of the discussion, Rep. Lanoue pointed out that “Other states do it real quick, we are late” which is a really strong argument that Connecticut should start working on it now! 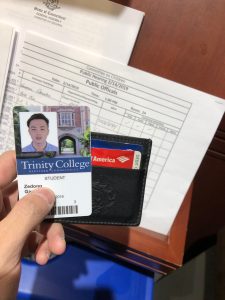