Hartford, Connecticut — Around noon today at the General Assembly, newly elected Governor Ned Lamont (D) finally gave his long awaited speech on his budget proposals for the fiscal years 2020 to 2021. It was only his second time addressing the legislature since inauguration, his first being the State of the State address in early January.

Lamont, who had an extended time to craft his budget since it was a transition year, provided a hard-copy budget to legislators earlier in the day and is set to give a more specific budget presentation today. State finances for the next two years are expected to have billions of dollars in deficits, and many have been curious as to how the businessman turned governor will avert these deficits in the budget.

During his roughly thirty minute speech, Governor Lamont laid out his robust plan for the state, some proposals well received and others not so much. Among other things, he suggested new taxes on everything from haircuts to plastic bags, tax ideas that Republicans will likely not support. Governor Lamont has also proposed new tolls on trucks and increasing the smoking age to 21. Towards the end of the speech, he referenced support for legalizing marijuana and regulating casinos, but refrained from highlighting those issues since they are already being worked out among the legislature. Legislators will have an opportunity to make changes to the budget before approval by the General Assembly in the coming weeks.

The governor expressed grave concerns if we don’t make these changes quickly.

“Now let me be blunt. If we don’t fix this bond our current payment plan could have disastrous consequences. Our annual contribution to the teachers fund could end up being higher the amount than the amount the state pays for education across the state”. Lamont’s strategy for boosting the fund also includes extending the payscale for the pension system and decreasing the assumed rate of return.

Democratic State Senator Martin Looney is supportive of these proposals, and spoke to WSFB about his thoughts on the matter.

“A town like Greenwich, they pay their teachers much more than anyone else. They also have smaller class sizes, but the state pays the entire costs of their pensions.”

Similar proposals impacting teachers would be increasing the state minimum wage and paid family and medical leave, all ideas that have garnered some bipartisanship support.

As Ned Lamont begins his tenure as Governor of Connecticut, many are left wondering how he will govern with looming deficits and a majority in the legislature. Only time will tell how his proposal changes and how they will impact this great state.

A full text of his full budget proposal can be found here . 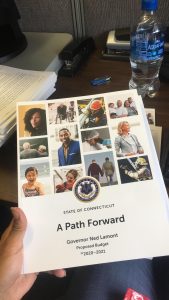 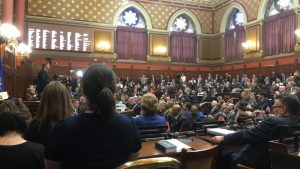