By: LiliAnna Khosrowshahi and India Shay

The teachers and other state employees in America are currently struggling with the salaries they are given alone. Something that has also always been an issue, additional to the low salaries, are pension funds for state employees. When a teacher or a state employee decides to retire, they are owed a pension that is responsible for paying their living costs for the remainder of their life. In order to have enough money to pay for these pensions, states put money away each year into a fund from which they then provide the money necessary to pay the pensions of the retiring employees. On February 19th, Ned Lamont spoke at City Hall in Hartford and discussed his approach to addressing, and hopefully, correct the weakness of the pensions that some states are providing their employees with. Connecticut, along with many other states, is not putting enough money away to be able to afford pension plans. Coupling that with the fact that their assumptions on returns, or the money that is set aside for pensions, have been too aggressive. Thus, the state is leaving a large gap in the pension money to be given. The assumptions on those returns have been too high and the actual returns have been too low, resulting in the amount of money being way less than what was expected or deserved.

The plan now for states such as Connecticut, is that they must figure out how to fill the gap and to get the money to make the pension plans whole and substantial. Ned Lamont is currently struggling to come up with the best plan of action and is working different ideas in order to solve the issue. It is likely that he will go with a plan that is not ideal for many but is the most realistic way to avoid this issue in the future. His solution has two parts to it; The first is to make an attempt to stretch out the payments over a longer span of time while the second is to collect more in sales tax in the short term. One large component that Lamont is hoping for, which could go into raising taxes, suggests that the same sales tax that is collected on off-line purchases should also be collected on online purchases. This aspect could impact Lamont’s plan greatly

State employees are devoted to the state that they work for and Lamont makes the argument that they (the state) owe it to these people to provide them with a decent pension. Lamont specifically mentions state educators as individuals who should be the priority in all of this as he states, “they work their heart out…they look after our kids.” He argues that by supporting teachers and other state employees, they will be able to prove their stability of towns and cities. In short, this is a very big issue that has been happening all over the country and teachers are getting the backlash of it. Retired teachers have every right to be concerned for their futures and it is by no means their fault but Lamont has no choice but to create a new way to solve this problem for the future of these teachers. 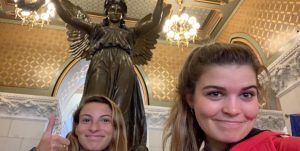