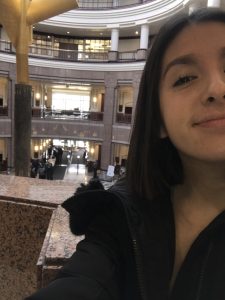 On Thursday, February 28, 2019 the Committee on Children held a public hearing in which several community advocates, organizations, and state departments came forward to present their cases surrounding issues of Connecticut children. One such notable and impassioned speaker was Sarah Eagan of the State Office of the Child Advocate. In a compelling argument in favor of bill 892, “An Act Concerning the Safety and Well-being of Youths Placed in Out-of-Home Settings Licensed, Administered, and Investigated by the Department of Children and Families”, Ms. Eagan reintroduced the room to a prior case of a young girl named Destiny, who, due to abominable circumstances and poor ethics and resources in her place of care, committed suicide while 8 months pregnant less than one year ago. As Ms. Eagan rehashed this tragic story and the further suicide cases due to “immediate jeopardy of harm” in the South Campus of the Solnit Center, a children’s Psychiatric hospital in Middletown, CT, that were unveiled after the June 2018 investigation, the room was quiet with the heavy implications of the case.

It was made clear, however, that the intent of retelling this painful story was not merely to drudge up past horrors but was to instead shed light on the issue at hand in bill 892: an absolute lack of transparency in communication to families of highly vulnerable children in the state’s care. According to Sarah Eagan, when the case of 16-year-old Destiny was being investigated last year, a representative from the Solnit Center where Destiny committed suicide admitted that no attempts were made to contact either Destiny’s family about warning signs prior to the suicide, nor the families of the children involved in the 6 other suicide attempts that month at the same psychiatric hospital. Neither were there any attempts made to alert families of the “grave deficiencies” in resources and facilities discovered during the investigation (Eagan). The bill being proposed, that which Sarah Eagan on behalf of the Office of the Child Advocate vehemently supported, would mandate some sort of notification system to families regarding deficiencies found in psychiatric units such as the one in Destiny’s case. It would define and require a collaborative communication process between the Department of Children and Families (DCF), Office of the Child Advocate and other potential organizations in the interest of children, and families and communities of the involved children so that, as Eagan put it, the communication system is “not black-out in nature” (meaning there is more transparency).

I found Ms. Sarah Dougan’s argument to be incredibly compelling. Furthermore, after her explanation of the opaque nature of communication in matters surrounding the well-being of highly vulnerable children such as those in psychiatric hospitals, foster care, or within the grasp of the state, it seemed to me that such a bill was absolutely vital and ought to be a valence issue that passes with flying colors. There is no justifiable reason that parents and families, many of whom reluctantly and broken-heartedly had to reach out to the state and ask for help in better caring for their children, should be so in the dark concerning the state of their child’s health and safety. If put into law, such a bill would, in my opinion, go beyond easing the minds of concerned parents and extend into the territory of raising the standard for the ethics, care, and resources given to vulnerable children. A facility that is mandated to report any deficiencies in their care to parents and families would by its very nature put in effort to minimize such deficiencies, if for nothing more than to save face and not be forced to report as many grievances on themselves. And a facility, whether that be a foster home or a psychiatric hospital or anything in between, that provides a higher standard of care than is currently present will undoubtedly play a role in a child’s comfort and safety both in and out of the classroom.