The film The Cartel is a critical review of the questionable administrative practices in American education using New Jersey public and charter schools as a case study. Reporter Bob Bowdon discusses largely the ineffective tendency in American education to perpetually throw more and more money at a problem without any real progress or change. From an administrative standpoint, Bowdon points out the negative effects of tenure for teachers and how it makes removing ineffective or even dangerous teachers from the classroom. Throughout the movie, there are many interviews with the leader of the New Jersey Educational Association (NJEA), which is the major teachers union in New Jersey. The movie adopts the approach that the union is less concerned with the adequacy of the teachers and more just protecting their jobs, sometimes at the expense of the student. In addition to the harmful effects of the union, the documentary exposes the unfair practices associated with charter school application as well as the district avoidance of approving charters because of the goal of keeping money within the district. Bowdon also highlights the controversial voucher program however they receive so much opposition yet they tend to yield very good results in allowing children to go to schools they otherwise wouldn’t be able to go to. The movie is summed up in a simple statement made as one of the last lines of the movie, “this is a crime, it’s not terrorists that are going to destroy America, it’s urban public education” (The Cartel 1:30:30).

The overarching message of The Cartel is that education operates under a corrupt system. Bowdon points out a few major points as to why this is but clearly rests on the contrast between district public schools and sources of alternative schooling. Under this corrupt system, as much as billions of dollars can go missing and without any sort of accountability it seems that there is no change. The theme of corruption remains throughout the entire movie and doesn’t solely point to monetary examples. Examples such as the district officials denying charters without any official reason or for something as small as a minor typo in the application highlight Bowdon’s critique of the system. With corruption at the root of the issue, he shows how the political structure of the education system is more concerned with the bureaucracy of teaching and not the actual learning of students.

The greatest example of the corruption of schooling Bowdon points out in The Cartel is the level of spending per student in America without and results. Specifically Bowdon points the Paterson JFK High School. After asking people in the community how much they think is spent per class, the consensus is around $90,000. The people are shocked to find out that it is over $300,000(The Cartel 0:06:55). With this kind of spending within the classroom, one has to question why teachers still make around $55,000 a year. This is by far the most compelling evidence for corruption in the schools. It is absurd that as a nation we can spend that much and still be ranked 24th for world math scores as far as the PISA showed (The Cartel 0:02:34). Bowdon’s unique perspective as someone not operating within the educational system allows him to see these gross expenditures for what they really are: an exploitation of practices with no accountability. 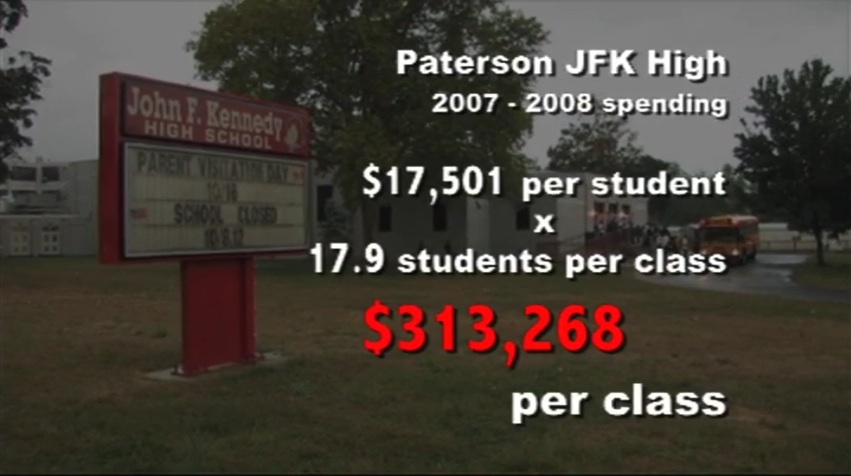 Bowdon goes on to look at the School Construction Corporation, which is responsible for allowing a billion dollars to disappear. While other programs in the district would have budgets that they went over or needed to supplement, Mary Jane Cooper, the New Jersey Inspector General, points out that for the SCC, “there was no budget”(The Cartel 0:18:47). This kind of oversight to not set limits on large-scale district run programs is exactly what Bowdon is trying to highline throughout the movie 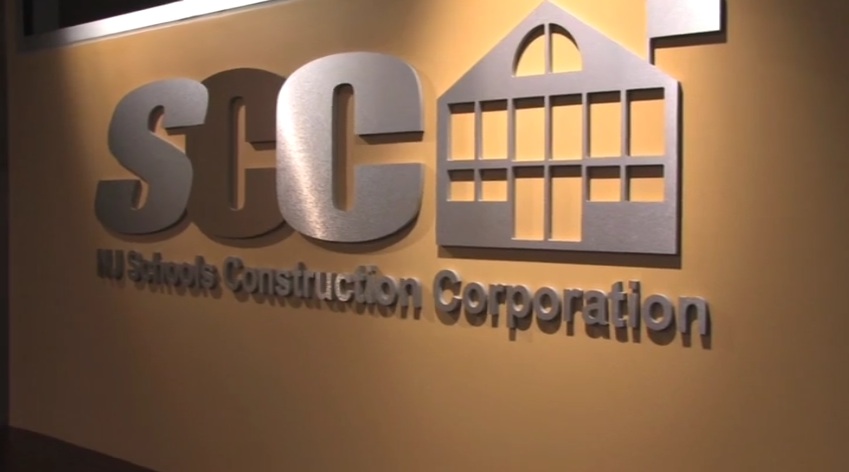 What Bowdon takes so much care to point out about the practices in New Jersey he then uses as a model of corruption to apply to the entire country. This is the area of the movie that seems to lack the same level of attention that he uses when looking at New Jersey alone. Amy Biancolli of the SF Gate writes that “From New Jersey, he extrapolates sweeping generalizations about school districts across the country” (Biancolli). While Bowdon’s documentary was received quite well as a message clearly conveying the crisis that our nation is experiencing, it does seem like the only crisis conveyed is the one found in New Jersey. There is definite merit to the question of whether of not this can really be applied to the national education system. While yes many of the points made are problems that are possible in every state that operates with school boards, but is it really a crisis found to this degree across the nation. Amy Biancolli shows how with huge generalizations, Bowdon loses elements of his credibility.

For my source detective posting, I was posed with the question of finding reviews of the educational documentary “Race to Nowhere”. Initially, I read the ones found on the official “Race to Nowhere” site and found that they were all in praise of the documentary. While personally I found the movie incredibly movie, this seemed too one-sided. Upon further research, I found that many of the other reviews found the movie overly dramatic and meant to incite panic about the national education problems.

Trip Gabriel’s review of the documentary focuses on the positive effects the documentary may have yet does so without attempting to “sell” the movie out to the public. Coming from The New York times, I initially felt it would be a very objective and credible review. With further reading, I found that the greatest element of credible research he comes away with is the fact that the documentary achieved national recognition without a major ad campaign or large-scale distribution. The fact that the movie didn’t need to self-sell itself and still was adopted as credible on a national scale demonstrates it’s incredible impact.

Another positive review I found was Cynthia Joyce’s review from NBC news. The reason I chose this one was because rather than focusing on the recognition the documentary gained in the country, she focused on the message. She does mention the enthusiasm students and others had for seeing and taking about the documentary. However while doing so, she created a clear picture of the goal of the documentary: to raise awareness about the race toward “over-credentialism” and the effects of the pressure it creates.

After finding two very positive review of the documentary, I searched for a contrasting view. Jay Mathews of The Washington Post provides a very overt critique of the inaccuracies of the documentary. The focus of his critique is on the fact that the documentary doesn’t focus enough on the actual facts of the issue and rather the places a focus on the emotional problems that take place. While this may be true, the view may be short sighted because the issue of schooling can’t be analyzed purely by facts. The product that is researched when concerned with education is a child so the emotional problems that are being caused are as much a “fact” as any other statistic.

As another negative review, John Merrow highlights the narrow scope of the documentary. His critique is mainly focused on the fact that the movie demonstrates many aspects of schooling that are detrimental to the child yet it waits until the very end of the movie to show any sort of alternative schooling which, as we know, is a major portion of the national education spectrum. This review is the only negative one that I feel has merit. While I found the movie compelling and incredibly moving, I did get the feeling that it was attempting to be a scare tactic. This review shows the method in which it did so. He does spend a large portion of the article comparing “Race to Nowhere” to “Waiting for Superman” which isn’t as helpful when looking solely at this documentary. However, his critique remains accurate and thoughtful.

One thing I found when looking for reviews that weren’t listed on the official “Race to Nowhere” site is that many people adopted overly positive reviews. While the basis for the source detective post is to only post reviews that are helpful in finding objective and accurate reviews of the source, I feel that the number of dramatized and “over-kill” style review were overwhelming. For this reason I included the last of these five reviews. Ella Taylor’s review of “Race to Nowhere” is an example of the tendency to get swept up in the emotional component of the documentary and not fully analyze it. This review merely summarizes and even at times embellished the message of the movie rather than effectively convey the message to the audience.

Example 1: Plagiarize the original text by copying portions of it word-for-word.

The estimates of value-added and other “growth models,” which attempt to isolate the “true effect” of an individual teacher through his or her students’ test scores, are alarmingly error-prone in any given year. The average “margin of error” of a New York City teacher was plus or minus 28 points.

Example 2: Plagiarize the original text by paraphrasing its structure too closely, without copying it word-for-word.

The ways in which teachers are evaluated in New York City and Houston have an average margin of error of plus or minus 28 points. For example, if some teachers ranked in the 43rd percentile were compared with other teachers, they may be as low as the 15th percentile or as high as the 71st.

Example 3: Plagiarize the original text by paraphrasing its structure too closely, and include a citation. Even though you cited it, paraphrasing too closely is still plagiarism.

The ways in which teachers are evaluated in New York City and Houston have an average margin of error of plus or minus 28 points. For example, if some teachers ranked in the 43rd percentile were compared with other teachers, they may be as low as the 15th percentile or as high as the 71st (Ravitch 270-71)

Example 4: Properly paraphrase from the original text by restating the author’s ideas in different words and phrases, and include a citation to the original source.

There are inherent errors found in how teacher performance is measured that are so large these measure can be seen as ineffective and unreliable. In some places, ranges of up to 28 points of difference in how these teachers are tested on their adequacy can be found. Thus, the question arises, how can these measure be trusted if there is such a high degree of variability in the results (Ravitch 270-71)?

Example 5: Properly paraphrase from the original text by restating the author’s ideas in different words and phrases, add a direct quote, and include a citation to the original source.

In looking at the ways in which teacher performance is measured, one can’t help but see that there are certain unreliable aspects to the methods. In a study performed by an economist at NYU, Sean Corcoran, “He found that the average “margin of error” of [the measure of] a New York City teacher was plus or minus 28 points”(Ravitch 270-71). In addition to the level of variability on every test, the performance of the teachers changed each year. These two factors provide the basis for why this measure of the performance of teachers in quite unreliable (Ravitch 270-71).

I hope to learn more about the public side of schooling. From to going to school board meetings and hearings in Philadelphia, I found I was interested in how the school boards interact with the surrounding community. Reforming schools is a processe that requiers a large amount of community approval and involvement to be effective, so I hope to learn more about how that takes place.