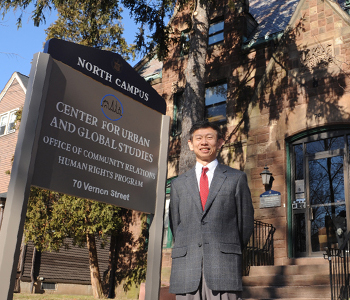 In the autumn of 2007, Xiangming Chen arrived at Trinity to become the founding dean and director of the College’s Center for Urban and Global Studies (CUGS), which began that year thanks to a major donation from the Andrew W. Mellon Foundation. Chen brought with him strong credentials—a distinguished 18-year career at the University of Illinois at Chicago and an impressive body of scholarship. He was precisely the sort of leader that the new center, the first of its type at a top liberal arts college in the United States, required.

CUGS is at the epicenter of Trinity’s strategic mission to integrate urban and global education in Hartford and globally. And Chen wasted no time tackling that mission. In November 2008, he convened the new center’s first major conference. It was a two-day program that drew speakers, panelists and participants from all over the region, including 13 prominent scholars from Harvard, Brown, MIT, Yale, and other major universities, plus a large, interdisciplinary contingent of Trinity faculty.

The collective focus of the conference—Rethinking Cities and Communities: Urban Transition Before and During the Era of Globalization—signaled Chen’s determination that the center would lead, rather than follow, in defining new and innovative ways of thinking about the role of cities in the future of the planet. And the subjects of many of the papers, inspired by that focus, spoke volumes about his vision for the new center, which seeks to balance Trinity’s commitment to international learning opportunities with the College’s commitment to employing Hartford and the region as an experiential learning laboratory.

Now, four years later, a book—Rethinking Global Urbanism: Comparative Insights from Secondary Cities (2012, Routledge)—has emerged from that seminal conference. Edited by Chen and Ahmed Kanna, assistant professor in the School of International Studies at the University of the Pacific, the book’s 12 chapters are expanded from papers presented at the 2008 conference.

Not surprisingly, some papers presented at the conference focused on issues related to the Connecticut River Valley and the historic impact of economic change on Springfield and Hartford. But several papers ranged far abroad, tackling such diverse subject matter as social accountability systems in African cities; the intersection of global politics and community politics in San Francisco’s Chinatown during World War II and the Cold War; the struggle of Black women for land rights in Brazilian cities; and the community-based nature of women’s activism in response to global economic and political change.

Those themes are explored in depth in Rethinking Global Urbanism. “Today cities play a more important role in the connection and organization of global economic activities and everyday activities than ever before,” asserts Chen, “but scholars often do not explore the importance of cities beyond a handful of mega-metropolises. This is a narrow-minded and short-sighted view of the interconnected world of cities. Many secondary cities are playing increasingly stronger roles in the global economy than many people might imagine. They deserve more focused scholarship.”

In addition to Chen, the book includes chapters by two other Trinity faculty members, Associate Professor Beth Notar of the Anthropology Department and Assistant Professor Scott Tang of the American Studies Program. And several of Chen’s former students left Trinity with a credential few undergraduates, in any discipline, are able to boast, a citation in a significant scholarly book.

This story was extracted from an article that appeared in the spring 2013 issue of The Trinity Reporter. Read the full article here.