My first three posts were about my motivation, initial design, and first implementation of my mastery-based grading system and now I want to talk about the purposeful changes I made last semester and how the system was impacted by the shift to remote learning.

I taught the same course (Math and Politics – a general education course, see this post for more information and my initial mastery grading setup) so I was able to make direct changes to various components of the mastery system based on the initial experience and my reflections (see this post).

I made a few minor changes to specific objectives (consolidating, eliminating, rewording, etc.) but a more significant change was converting assignments to objectives to (hopefully) give them more value by identifying the main learning goals I sought from the assignments and placing them alongside the other content goals for each of the units. The assignments included completing practice problems (students chose which ones to write up from a larger set) and writing assignments similar to those I had assigned in the past.

As mentioned in my previous reflection, I also added a category of “overall objectives” which included attendance, participation, and four brief reflections that were not tied to a specific unit in the course but that I view as valuable in a general education math course (the relationship between math and privilege, productive struggle, growth mindset language, and a final reflection on the course).

This time around I had a total of 80 course objectives:

Rather than using a “bundle” approach as last semester, I decided to simplify the process by having a total number of objectives mastered correspond to a final letter grade. This makes it much clearer to students where they stand at all times and does not distinguish (grade-wise) between the procedural and conceptual objectives. After going through the spreadsheets from last semester I didn’t think it was necessary to separate them in order to translate to a final grade but I still labeled them in their respective categories to identify the different types of (mathematical) thinking that correspond to the objectives.

I gave each student 10 (digital) tokens for the semester where each token could be used to retake any objective, submit an assignment late, or resubmit an assignment. In an attempt to motivate higher quality assignments (beyond the minimum needed to satisfy the objectives), I also awarded an additional token to students that submitted excellent work.

This looked similar to last semester with a couple of changes. I added a “progress bar” on the top with boundaries for the different letter grades and a display of their total number of objectives mastered and the corresponding final grade. I also added checkboxes and formatting to the “token bank” to make it easier for myself and add another visual element for students. (Click to enlarge the screenshot below.) 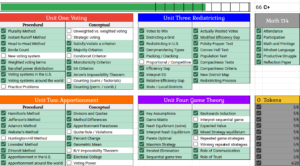 Given the circumstances, the transition to remote learning amidst the pandemic actually happened at a good time in the course because I had just given the exam on the second unit (it was right before our scheduled Spring Break) meaning I could start fresh on the remaining two units in a new format. For the first two units, I had constructed guided note packets that we would work through in class and quizzes and exams were used to assess the objectives.

For this class, I decided to go the asynchronous route and make videos that went through the notes and examples and then created assignments that corresponded to the videos and the objectives. I also wanted to give students as much flexibility as possible with all the challenges they faced with remote learning and various life situations. As a result, I turned the content into weekly modules where I would post some videos (myself narrating and working through problems on my tablet) and an assignment on Monday which would be due the following Sunday. With 6 weeks of remote learning in the semester and two full units remaining, this worked out nicely in terms of having 3 modules for each unit. (Notice if you look closely at the spreadsheet screenshot above, there are no “procedural” and “conceptual” labels for the last two units as the objectives are organized by the weekly modules instead.) I did not give any quizzes or exams and mastery of objectives was completely based on grading their assignments and the questions that corresponded to the objectives. In terms of accessibility I had virtual office hours each week at set times where students could discuss that week’s assignment with myself and each other.

Another outcome of remote learning is that I did not give a final exam which I did last semester as a “final opportunity” to earn any missing objectives and instead I scheduled individual virtual meetings with students for them to use their tokens. Given the circumstances and stress I did not give them new problems to demonstrate mastery and I simply had them go through their old quizzes, exams, and/or assignments and explain to me why they got certain problems wrong and how the problem would be corrected. The students knew this ahead of time so that they could adequately prepare and this token use is not a structure I would use in “standard” semesters but my human response was to ease some of the expectations in the trying times.

As an anecdote, I’ll add that the final distribution of grades was the most bimodal that I’ve ever had as about 60% of the students got A’s and the other 40% received C’s. I attribute this to students having the ability to change grades to pass/fail and some students with less favorable learning conditions had no problem taking this route to satisfy their general education math requirement with no negative impact on their GPA while others were motivated to earn an A that would boost their GPA.

I just wanted to share a few things that students shared about their experience with mastery-based grading this semester:

Reaction to the grading system this semester was unanimously positive which is extremely encouraging and only continues to motivate me to extend such a system to other classes as well. Thanks for reading and I will continue to share my experiences in math education.

If you’re interested in trying mastery-based grading and want a spreadsheet template, I’m sharing mine with instructions as well: bit.ly/MasteryTemplate