The answer to the question “What is Hip-Hop?” isn’t easily answered. Hip-Hop is a culture, a style, music, dance, and a visual artform all combined. But even those terms are restrictive for something as monumental and impactful as Hip-Hop. What we can say is that Hip-Hop started in the 1970s and hasn’t stopped since. Hip-Hop has undoubtedly changed the world since its birth in the Boogiedown Bronx. Hip-Hop was a response to the problems minorities faced in society when it was created. A form of expression to rival any before. An art form that was decidedly and purposely made for the minority but catchy enough to be irresistible, even to the powers that be, it disputed. Hip-Hop is an art form that thrives on change. It has stayed on the cutting edge of the media remaining a hotly debated topic even in modern times.

Hip-Hop at its basis was a cultural movement founded around 1978 by Grandmaster Flash, a DJ. His unique sound system and style of mixing the “breaks” of songs together was something entirely new. At the time, disco was the scene sweeping New York by storm, but the sparkly outfits and ephemeral lifestyle associated with the style seemed unattractive and unattainable for the impoverished youth of the city. This new style of music, however, was infectious, accessible, and relatable. DJs would often use the most popular parts of songs that people already knew which appealed to people because it was easily recognizable but at the same time very different from any style before it.

SCRIPT:
Hartford has a vibrant Hip-Hop community and the Heaven Skatepark is a shining example. The park is a great place for people to skateboard or bike. But the park is also home to some breathtaking graffiti pieces. The art in the park shows off the amazing diversity of the city ethnically and artistically. The park allows local creatives a safe place to show off their graffiti skills. The beauty of the park is that it acts as a living gallery. The art we saw on our trips could very well be completely different within a year. Parks like this are a great example of the camaraderie within the art and Hip-Hop communities. While pieces are covered as the park evolves pieces by respected local artists often stay much longer. In the park, you can see several styles some people leave tags reminiscent of other taggers in the 1980s, while some do larger throw-ups. Some artists like Corey Payne, a renowned local artist goes as far as creating full artistic scenes like his mural downtown celebrating Hispanic culture in collaboration with the Cirque de Soleil Luzia tour and his Nipsey Hussle mural in the skate park that was recognized nationally on tv and social media. Part of the beauty is that the park reflects almost every style of Graffiti. Simple tags left by artists like VEOH. Throw-ups like this one by 51ER. Blockbusters the larger version of throw-ups used for covering a larger space like this one by Vertex. Amazing wildstyle, known for its complicated lettering and unique style of harsh arrows and curves as shown in these pieces. And full Masterpieces like the ones by Corey or this modern rendition of the girl with the pearl earring by OTM. There are also “Heavens” tags or art in hard to reach places high on the buildings in the park. Other artists prefer to show their style in a different way with stencils or stickers also known as “slaps”. The story of the park is one of a constantly evolving gallery that will continue to reflect the art scene in Hartford as long as it exists. It also shows the relationship between skateboarding and graffiti, two of the most notoriously disliked countercultures. The union and acceptance of these two amazing styles is a testament to Hartford’s continued support of its local creatives. In short, Hartford has it and the skatepark is a shining example whether you’re looking for amazing graffiti or a fun place to skate with friends. 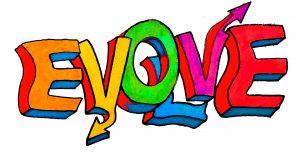 For my Creative Expression assignment, I chose Graffiti as my Hip-Hop element of choice. I created this piece with EVOLVE as my one-word message because one of the most noticeable facts about Hip-Hop is how rapidly it evolved and changed over time. Stylistically I opted for large block letters with a wildstyle edge. The use of bold primary colors helps add to the youthful nature of the piece in order to represent the youth of the generation that created Hip-Hop. The changing colors on the front of the letters are there to represent how Hip-Hop continued to change throughout its evolution. The arrows are symbolic of the different sub-genres of Hip-Hop that evolved in different directions despite their common thread. My hope was to create a piece that was symbolic of Hip-Hops evolution while sticking to the guidelines of the assignment.

Welcome to my Introduction to Hip-Hop website. This will be the home for a few posts related to my First-Year Seminar. Thanks for visiting!

This first post will include a video, a link, and a picture.

Hip-Hop is the name of a track by Dead Prez, a rap duo from New York City. The two members, M-1 and stic.man began the group in 1996. They are now for their radical and pro-black lyrics. The song Hip-Hop talks about Dead Prez’s problem with record labels and corporate media. 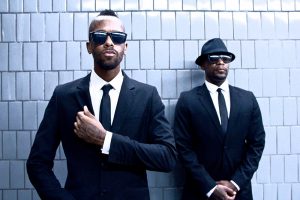