Six hours a day. That’s the amount of time a woman or girl in the developing world spends fetching water for her family. The lost hours keep her from attending school and engaging in income-producing activities that could pull her and her family out of poverty. Often she is traveling long distances carrying water in a five-gallon jug on her head. That’s more than 40 pounds of pressure on her neck and spine.

These facts do not sit well with Cynthia Koenig ’00, founder and CEO of Wello, a company based in New York City and Mumbai, India, that works to improve the developing world’s access to clean water. 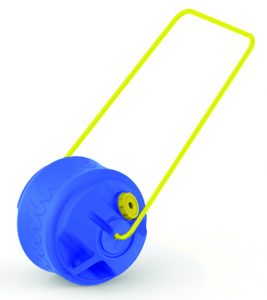 Wello’s flagship product is the WaterWheel, a 13-gallon rolling drum that transports up to four times the amount of water possible with the traditional method of head loading. It also hygienically stores and dispenses water. And because the barrel is attached to an ergonomic handle, “it’s as easy to push as a baby stroller,” says Koenig. “By using a WaterWheel, a woman regains 36 hours in her week.” It also saves women from pain and injury caused by head loading.

Koenig first encountered the global water crisis shortly after graduating from Trinity College with a degree in anthropology. She was working with an ecotourism company and living in remote villages in Guatemala and Mexico. With wells typically a 20- to 30-minute walk away, Koenig struggled to get enough water. “It struck me: How can anyone hope to get ahead if they can’t meet their most basic needs?”

The experience stayed with Koenig and led her to the University of Michigan, where she earned M.B.A. and M.S. degrees through the Erb Institute, billed on the university’s website as a partnership between the Ross School of Business and the School of Natural Resources and Environment. “I was intrigued with the idea of business as a solution to intractable social problems, like the global water crisis,” she says.

The inspiration for a rolling water device came to Koenig on an exploratory trip to India in 2010. “What was supposed to be a three-month trip became a full-time job,” she says. With a $100,000 Grand Challenges Canada prize, she launched an 18-month design process, relying on input from villagers in the desert region of Rajasthan, India. “Our early ideas were all over the place — from water-carrying balloons to ergonomic panniers for donkeys.” But what resonated most with the villagers was the idea of a rolling carrier.

Though initially founded as a nonprofit in 2011, Wello soon evolved into a hybrid social venture by incorporating for-profit companies in India and the United States. “Nonprofits are not designed for efficiency because of the continuous need to fundraise,” says Koenig. “A for-profit model was the best option to meet Wello’s goal of making our products widely available at an affordable price.”

While the nonprofit side of Wello raises awareness of the dangers of head loading, the for-profit side develops and sells products to consumers through third parties, such as aid agencies or government initiatives. “When people make choices in a market economy, they are deliberately choosing the solution that best meets their needs,” says Koenig.

This business model has proven successful. Since unveiling the WaterWheel in 2016, Wello has sold approximately 10,000 units, impacting more than 75,000 lives. In February 2017, the company licensed India sales and manufacturing of the WaterWheel to Mumbai-based Nilkamal, Asia’s largest manufacturer of molded plastic products. “We anticipate that by leveraging Nilkamal’s expertise in manufacturing and widespread pan-India distribution network, they will better serve the market of more than 250 million rural consumers across India, who lack reliable access to safe water,” says Koenig.

After spending much of the last five years in India, Koenig is now based in New York City, growing the business with new products — like a filter that purifies water as it rolls in the WaterWheel — and expansion into Africa and other parts of the developing world.

Koenig never set out to be a social entrepreneur. Nor did she come to Trinity to study anthropology. “I didn’t even know what it was,” she says. But the study of human societies and cultures proved to be a practical choice. “It gave me multiple lenses — political, economic, cultural — with which to view the world,” she says. “I realized we are more similar than dissimilar.”

Koenig’s adviser, Professor of Anthropology James Trostle, was particularly influential in inspiring her “to get curious about the world and take risks,” she says. Trostle was impressed with Koenig for “the clarity of her focus on applied international development issues.” At his urging, she studied sustainable international development in Costa Rica and taught English in China after graduation. “Both experiences were instrumental in shaping my future,” she says. “I developed a love of travel and learning about new cultures, as well as the confidence to follow a nontraditional career path.”

By her own admission, Koenig’s success — launching a design and innovation company in a foreign country with no design or manufacturing experience — is an unlikely one. “But I didn’t need those skills at the start,” she says. “My background in anthropology and business was ideal for Wello’s discovery and design stages.” As the business matured, so did her skill set and her team.

Michael Gordon, Koenig’s mentor and a University of Michigan business professor, agrees that Koenig’s success is exceptional. “Very few social entrepreneurs have built a successful enterprise in a foreign country and then negotiated an exit strategy, like Cynthia did with Nilkamal.” And Gordon should know. He recently interviewed more than 100 social entrepreneurs for his soon-to-be-published book, What I Wish I Knew Then: Becoming a Social Entrepreneur.

“There were a lot of sleepless nights,” says Koenig on starting her business. With few models to follow and having to negotiate the bureaucracy of another culture, she learned to be patient and to trust her instincts. She urges other would-be social entrepreneurs to gain firsthand experience with the problems they are trying to solve.

When not working on solutions to the world’s water crisis, Koenig is climbing other mountains. Literally. Later this year, she will join an expedition to scale Mount Aconcagua, South America’s highest peak.