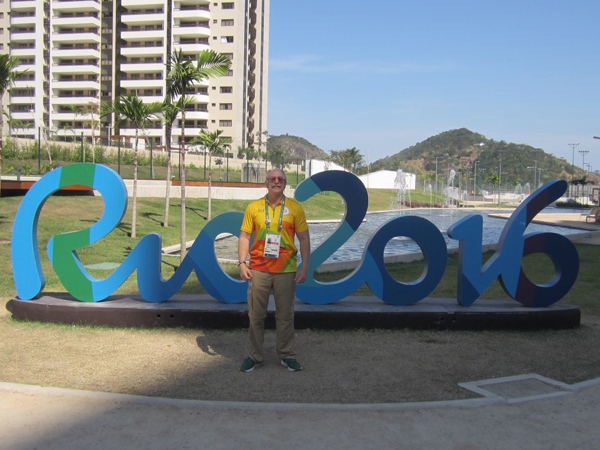 FAVORITE TRINITY MEMORY: I have many great memories, such as the hilarious times I spent with my brothers at Pi Kappa Alpha (Pike). Another memory that stands out was one morning as I walked along the path that connects Vernon Street with the library. I came upon an old man and asked him if he needed assistance. It turned out he was one of Trinity’s oldest living alumni. He was from the Class of 1916 but had left the College to fight in World War I. He then returned to graduate. Meeting him put a face to the names of the young men carved into the Chapel wall and brought to life the World War I English course I had taken. The moment gave me a perspective on what a special place Trinity is and how precious our time there was. The memory is even more meaningful now as he was set to graduate some 100 years ago.

It’s been about a year since you were in Rio supervising drug testing of the Olympic athletes. How did you come into that role?
As an athlete, I have tried to give back to sport by coaching and volunteering at events. For example, I helped to run the wrestling venue at the London 2012 Olympics and the powerlifting at the Special Olympics World Games. I applied for a role at Rio, and they felt that based upon my ability to run international sporting events, my experience as a drug-tested athlete, and my compliance expertise as an attorney, I should supervise the drug testing at the Olympic Village and for 23 of the sports.

What is your experience as a competitive athlete, and how did that factor into your work in Rio?
While I wrestled and played lacrosse at Trinity, my true passion is powerlifting, where I have been fortunate to have great success. I am an 18-time world champion and 32-time national champion (with an active streak of 21 consecutive); was a semifinalist for the 2013 Sullivan Award, given to the nation’s outstanding amateur athlete; and have been inducted into the AAU Strength Sports Hall of Fame. With my streak of wins, when the Trinity squash team was in the middle of its record streak of national championships, the boys and I would exchange e-mails encouraging each other. I have told Coach Assaiante that I am waiting for them to join me in another run. With that experience, I was able to understand the concerns of the athletes that the testing be fair and as least burdensome as possible while protecting the integrity of the competition and ensuring a level playing field. As a practical matter, I know how to get an athlete who is cutting weight by dehydrating through a urine test because I have been there. Candidly, I look like an athlete, and there is an instant rapport and comfort level. The Olympics is a stressful place, and I could help with that.

What did you enjoy most about the experience?
It was enjoyable as a challenge because I was able to carry out an important role in a high-stakes multicultural environment while coping with Zika mosquitoes, bad water, and other aspects of life in Brazil. Doping and the Russian ban were all over the news, and I was in the epicenter. As a sports fan, I was in heaven because I was at everything from Michael Phelps’s last race to the U.S. women’s gymnastics final to the men’s gold medal basketball game. Walking around the Olympic Village was at times surreal because I would think to myself that everyone I saw was among the best in the world at something. I was able to watch people like Usain Bolt and Ashton Eaton behind the scenes and learn from their focus and pursuit of excellence.

What do you do professionally outside of your work with the Olympics?
I am the general counsel of several companies. I am also a motivational speaker on health, wellness, and fitness. As a 50-something lawyer, I find that adults and businesspeople can relate to my message, while high school and college audiences want to learn about paths to success.

Watch Robert Herbst’s appearance on the Spartan Up! Podcast below.