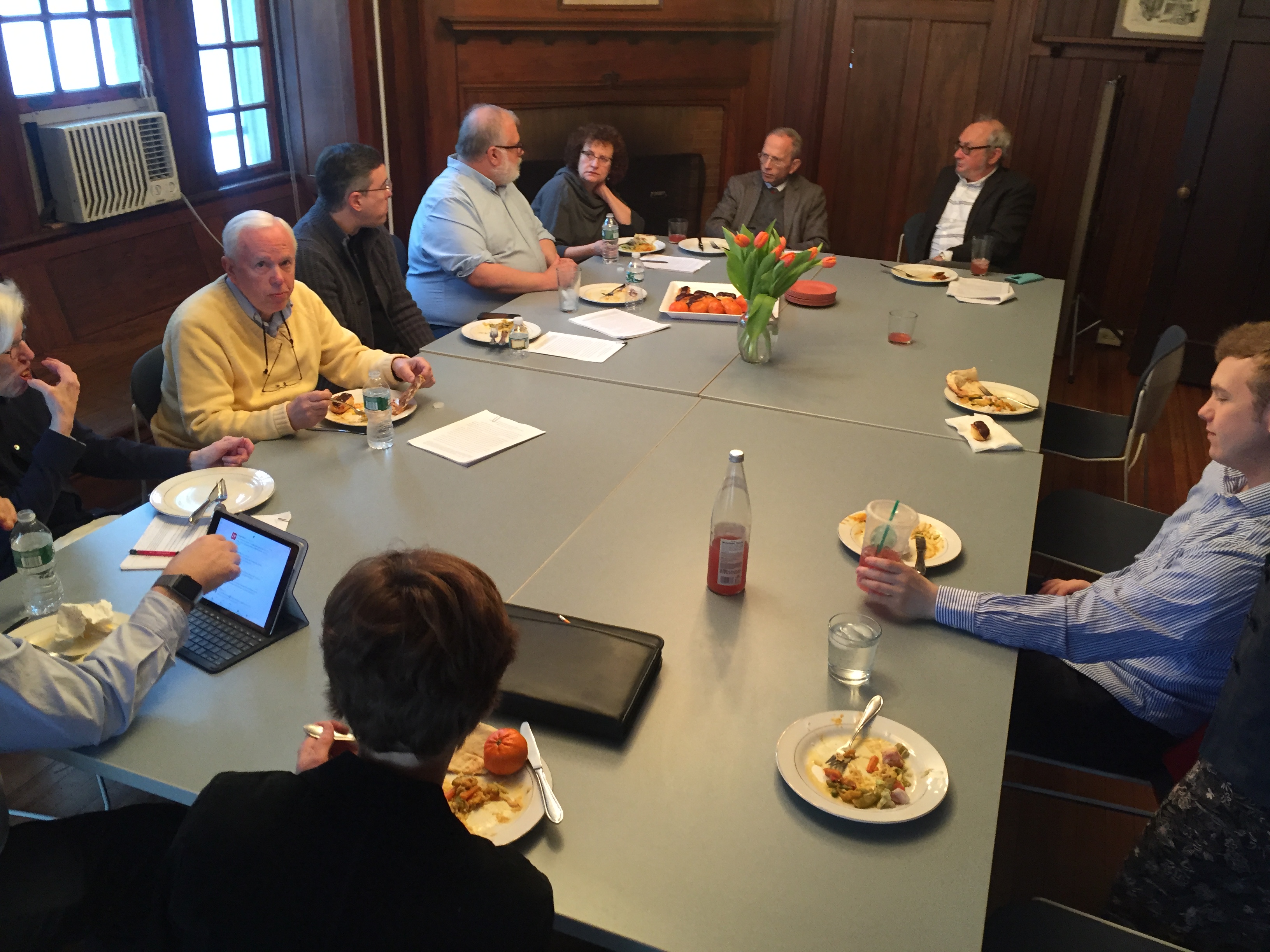 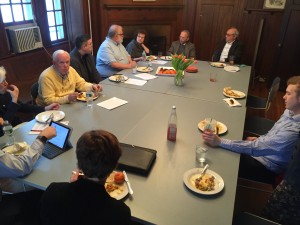 Most previously known mid-19th-century Jewish writers insisted that there was no organized Jewish politics in the United States and that American Jews “voted purely as American citizens,” Sarna said.

Greenberg Center Director Mark Silk introduced Sarna as the leading historian of Jews in America and “as the chief organizer of the field.”

A revised picture is emerging because of the opening a significant collection of early 19th– century Jewish-American documents given to Princeton University by Leonard Milberg. Sarna’s recent work in the archive produced the 2015 book, Lincoln and the Jews. In the Milberg collection, Sarna said he found what is now “the earliest known Jewish political broadside in existence.”

Sarna’s lecture, “Jews & American Politics: Historical Ideals and Contemporary Realities” was a highlight of Sarna’s four-day visit as Greenberg Distinguished Fellow at Trinity College, during which he visited classes, met with faculty and students and led a faculty research lunch (see photo above).

In his talk, Sarna unpacked the significance of the “Jewish Union Republican Association,” which strongly backed the re-election of Lincoln. In a broadside signed by 14 men from New York and Pennsylvania who claimed to speak on behalf of “the Jews of America,” the organization described its path-breaking role. “In the political affairs of our adopted country, very few members of our persuasion have hitherto been led to take an active part.”

“One more effort, strong, united and determined, and the Champion of Freedom, the Emancipator of the Slaves and the preserver of his country will be re-elected to the power he has so wisely and justly wielded during four years of civil war and political disorganization.”

At that time, most Jewish leaders were publicly insisting that Jews engaged in politics in the United States purely as individual citizens, that rabbis did not advise their congregants how to vote, that Jews did not organize to use politics to advance the community’s goals and never voted for candidates simply because they were Jews, Sarna said.

As late as the early 20th century, communal leaders often continued to take this line, said Sarna, citing the New York lawyer and community leader Louis Marshall as a good example. “We have no political interests which are different than those of our fellow citizens,” Marshall insisted in a typical intervention.

It now appears, Sarna said, that this sort of assertion was more often honored in the breach. The American Jewish community of the 1860s was tiny, with perhaps no more than 50,000 voters, most of them recent immigrants from Europe and very cautious standing out in American politics.

Nonetheless, new evidence suggests that American Jews actually participated fully in “ethno-religious politics,” as did contemporary members of most other American religious and ethnic groups. (In the middle and late 19th century there were very high rates of correlation between particular religious and ethnic identity and party identity in the United States.)

The American political system, which was all about voter mobilization, ineluctably pulled Jews and other immigrants in. And it worked faster than Jewish reticence could admit.

The Jewish Union Republican Association was “the first Jewish get-out-the-vote campaign in history,” Sarna said, noting that the Lincoln administration was eager to organize any support it could identify. As late as August 1864, Lincoln had expected to lose the election. A string of Union military victories reversed his bleak political outlook, as did the overwhelming electoral support he received from Union troops. And the Jewish Union Republican Association helped put him over the top.

The link between the Lincoln campaign and the Jewish community, Sarna said, was a German immigrant named Issachar Zacharie, a New York doctor who first helped Lincoln and many other senior Republican politicians in his role as a podiatrist. Zacaharie’s chief White House contact was John Hay, Lincoln’s secretary.

Organized partisan mobilization became more common in subsequent decades, but Jews were not tightly bound to a single party or politician. For example, it is now clear that Jews organized to support and to oppose Ulysses S. Grant in the 1868 election. Later, Jews were vigorous supporters of both Theodore Roosevelt and many urban Democrats.

In fact, Jewish voters and professional politicians became important participants in urban politics in the late 19th century as a result of dramatically increased Jewish immigration after 1880. And individuals often made considerable impact as campaign donors. The Jewish community eventually moved into substantial alignment with the Democratic Party, but not until the 1920s and 1930s.

“Since the 1928s, only one Democratic presidential candidate has ever attracted less than 60 percent of the Jewish vote,” Sarna said. (That was Jimmy Carter in 1980.)

At present, Jews remain a small group in a large electorate, but they maintain a substantial impact on American politics because of their geographical concentration, high rates of voter participation, and substantial levels of financial support for campaigns.

How long can the Jewish preference for Democrats persist? Over the last decade or two, signs of potential realignment have become visible, Sarna said. There’s more political diversity among American Jews. Orthodox Jews, a small but growing proportion of the entire Jewish population, have turned substantially toward Republican identity and Jewish concern for Israel has increased the number of Jews willing to vote Republican on foreign policy grounds.

“The prevailing balance will certainly change in the future, but it hasn’t yet,” Sarna said.