EM: To start, I want to thank you for taking the time to speak with me. It’s a goal of the college to form more connections amongst alumni and between alumni and students.

EM: Perfect, so the first question that I have for you is, what have you done since leaving Trinity?

LK:  I went to law school, became a lawyer, and practiced civil litigation for two decades. I’m now a full-time mediator and arbitrator, so I help resolve lawsuits rather than create more.

I have two girls. I live in Orlando. My wife is in clinical research. I keep in touch with Pi Kappa Alpha fraternity, which is diligent about updating alumni on the student body. 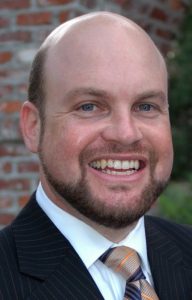 EM: And I see that you also did rowing.

EM: Why did you choose political science as your major?

LK: I started in poli-sci because I had a high school government teacher who was very influential. It made me start thinking about law and politics. I enjoyed my freshman seminar called Speech and Political Communication with Professor Clyde McKee. He lived right on Crescent Street and used to have us over to his home on Fridays where his wife made dinner. He was just a really great adviser. Those experiences shaped my interests.

I also had a wonderful poli-sci professor named Albert Gastmann. Professor Gastmann taught international law and international relations. He would take us down to the U.N. in New York. He informed us about UNCLOS, the law of the sea, and I actually went aboard a schooner for Sea Semester sophomore summer, learning even more. He lived right at the bottom of the hill in the faculty apartments on Broad Street and was really accessible.

My junior year, I attended our Rome campus founded by my Italian Professor Michael Campo. He took us around eternal Rome everyday from the little convent where we lived. We learned all about the complex politics of Italy and got to speak the language, of course.

My senior year, I worked on the Florida gubernatorial race for Bill Nelson who later became our U.S. Senator. I had worked in D.C. for Nelson as an L.B.J. Congressional Intern. I also took a senior seminar on the Supreme Court with veteran Professor Rex Neaverson, after enjoying his popular Constitutional Law course. All of those things combined directed me toward law school.

EM: What accomplishment are you most proud of?

LK: The highlight of my being a lawyer was receiving the Legal Aid Public Service Award from the Florida Supreme Court. I was recognized for helping an abused and neglected child. I always represented abused and neglected kids as part of my pro bono work for the Orange County Bar Association. I had this really terrible case where an addicted mother abandoned a 20-month-old girl in an alleyway and the father was in prison. I became the child’s guardian ad litem. After many years of litigation and a termination of parental rights, the child was eventually adopted by her foster mom (who recently invited my family to dinner in appreciation of all my efforts). Now in her twenties, she just graduated college and works with marine mammals. I just remember this little infant that I represented and now she’s a full-grown woman who ended up having a nice childhood. That still makes me feel proud. I encourage all people to engage in rewarding pro bono work when they can.