Davarian Baldwin’s Vast Scholarship on Display in Hartford, Around the World 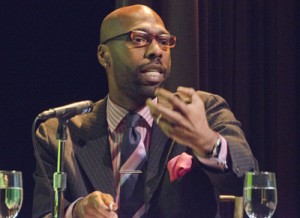 Davarian Baldwin during a February panel discussion at the Wadsworth Atheneum.

When Davarian Baldwin, Paul E. Raether Distinguished Professor of American Studies, joined Trinity’s faculty in 2009, he saw the tremendous value of the College’s Hartford location as a source of scholarship and as an ideal setting for a liberal arts education.

​“It’s about getting students out beyond the campus walls,” he said. “Doing work, talking to people, asking questions, and listening…and hopefully even acting.”

In the years since, Baldwin has made good on that goal, leaving his mark both on Hartford and on urban landscapes throughout the country. His scholarship is vast, including such subjects as the civil rights movement, the role of African Americans in shaping American culture, and urban institutions of higher education.

At Trinity, Baldwin is not only teaching at one such institution, but well positioned among the other cultural institutions that make urban America so distinctive. Recently, he participated in a panel at Hartford’s Wadsworth Atheneum, “Race and Identity at Coney Island.” The interdisciplinary symposium was part of the Wadsworth Atheneum’s current exhibit, “Coney Island: Visions of an American Dreamland, 1861–2008.”

Baldwin’s scholarship is on display not just in Hartford, but around the country. Baldwin’s expertise was featured by USA Today in a recent story about the Harlem Renaissance. The Hartford Courant turned to Baldwin to address the role of social media following protests in Ferguson, Missouri. A recent podcast from the New York Public Library’s Schomburg Center for Research in Black Culture featured Baldwin and his theory of “UniverCities.” Also at the Schomburg Center, he was part of a discussion about the role of slavery in the development of institutions of higher education and how those institutions are transforming urban America today.

Among the institutions Baldwin has examined are the University of Chicago, New York University, Arizona State University, and – of course – Trinity. And his scholarship has not been restricted to American audiences; on April 9-10, Baldwin will be in Shanghai, China, to present on “University-Community Relations in the Urban U.S.” at the City and Society International Forum at Tongii University.

“There’s no question that being here and having the support of Trinity’s leadership has helped make this possible,” he said.