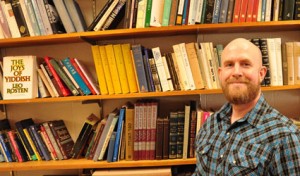 Seth L. Sanders, an associate professor of religion at Trinity College, has been awarded a Guggenheim Fellowship to support his research and writing as a biblical scholar.

The John Simon Guggenheim Memorial Foundation grants funding to fellows based on “prior achievement and exceptional promise.” Sanders was one of 175 scholars, artists, and scientists selected this year, from among more than 3,100 applicants, in the Guggenheim Foundation’s 91st competition. Sanders also was recently awarded a National Endowment for the Humanities grant to support his scholarly work.

Sanders plans to use his Guggenheim Fellowship and NEH grant to finish researching and writing his third title, Why We Can’t Read the Torah: The Form of the Pentateuch and the History of Ancient Hebrew Literature. Through this book, Sanders intends to analyze the literary values of the Torah to understand its place as one of Western history’s most fruitful pieces of literature.

“Religious people have struggled with the Bible’s contradictions since they first read it, and scholars have used them as a window into how it was created. What my project can explain is why those contradictions were put in the text in the first place,” Sanders said.

“As a collection of incompatible versions of similar stories, the Torah is unlike any other major work of ancient literature,” Sanders said. “Biblical scholarship still cannot agree on how this new paradigm arose. My project draws on ancient Near Eastern evidence to explain what is new about it by placing the Torah in literary history.”

Sanders, who has experience working with sources in Hebrew, Akkadian, Aramaic, and Ugaritic, will conduct his research in Philadelphia and Ann Arbor, Michigan, both of which have major research libraries and scholarly communities in his field.

Trained in Bible, Semitic languages, and comparative religion at Harvard, Hebrew University, and Johns Hopkins, Sanders has been a Trinity College faculty member since 2007. He studies how political identities and religious experience were created in ancient Israel, and his work connects the Bible, Jewish identity, and political thought from ancient Israel to modern nationalism.

Sanders recently returned from a special session of the American Oriental Society in New Orleans, where he brought together a group of scholars to investigate the questions his project raises more broadly, across the ancient world from Egyptian and Sumerian to Babylonian and Canaanite. The results will be featured in the next issue of the Journal of Ancient Near Eastern Religions, for which Sanders is editor, and in a future book project.

His first book, The Invention of Hebrew (awarded the Frank Moore Cross prize from the American Schools of Oriental Research and a finalist for the National Jewish Book Award) argues that Hebrew was the first successful vernacular literature, which helped create ancient Israel and the Bible as both historical and imaginative possibilities. His forthcoming second book, From Adapa to Enoch: Scribal Culture and Religious Vision in Judea and Babylonia, explores the cultures that created the Hebrew Bible and Dead Sea Scrolls via their mythical heroes.