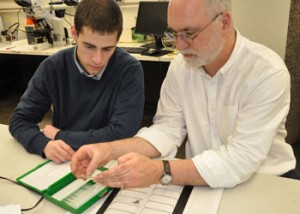 Research by Trinity College Professor of Biology Kent Dunlap and his student Michael Ragazzi ’16 was published this month in one of the world’s oldest scientific journals, Proceedings of the Royal Society B, based in London, England. The paper, which Dunlap and Ragazzi co-authored with researchers from Canada’s McGill University and Cape Breton University, reports that predators inhibit brain cell production in natural populations of electric fish.

A truly international collaboration, the project began with a trip to Central America by Dunlap and Canadian researchers during the spring of 2014. Dunlap’s mission: to capture electric fish, Brachyhypopomus occidentalis, from six field sites, to study how stress from predators affects the brains of those fish in their natural habitat. Electric fish in these streams are exposed to varying levels of predation by catfish.

“I came back from Panama with over 80 fish brains,” said Dunlap, explaining how the brains needed to be painstakingly preserved on dry ice even while doing fieldwork in the tropical heat. Upon arrival on campus, the frozen fish brains became Ragazzi’s challenge. His focus: how best to assay, or examine for analysis, cell birth in the fish brains – a procedure starting with the use of a cryostat to shave extremely thin brain slices. “Through trial and error, Michael optimized the process for detecting newborn [recently produced] brain cells,” said Dunlap, adding that it would be impossible to describe the project without bragging about Ragazzi’s contributions. A biology major now in his senior year, Ragazzi has worked in Dunlap’s research lab since his sophomore year, and this is the second research paper they have co-authored.

According to Ragazzi, the basic question posed by this project is, “How does the natural environment affect brain structure and function?” The use of fish brains was especially intriguing, he explained, due to the fact that “electric fish can produce new brain cells at a rate 10 to 100 times greater than mammals, including humans.” However, they found that environmental stressors can have a large impact on the brain: fish living among a lot of predators produced brain cells at about half the rate as those living among few predators.

Although many studies have examined the effect of stress on the brain in laboratory animals, this study is “the first demonstration of predator-induced alteration of brain cell proliferation in a free-living vertebrate,” according to the paper co-authored by Dunlap and Ragazzi. Their work was funded in part by a grant from the Trinity College Faculty Research Committee.

Ragazzi said the opportunity to work on such an elaborate scientific project was of great value as he considers the possibility of medical school in his future. “I appreciate how the experimental questions we explored integrated different scientific disciplines,” said Ragazzi. “Our work required us to read and incorporate aspects of ecology, neuroscience, biochemistry, and psychology.”

Asked what advice he might offer to other Trinity students who are considering majoring in biology, Ragazzi said, “I would advise them to consider the skills that the biology major can offer. Upper-level classes require you to integrate the basics of biology to understand how larger biological systems function, and they foster your critical thinking skills. Consider doing research with a biology professor; it allows you to sharpen the skills you learn in classes, and it gives you a deeper understanding of scientific research.”

A member of the Trinity College faculty since 1998, Dunlap holds a B.A. from Macalester College and a Ph.D. from the University of Washington, Seattle. In his research, Dunlap pursues questions at the cellular, physiological, behavioral, and evolutionary levels. While his current research is on fish, he has conducted research on lizards, frogs, and rodents in the past.

Proceedings of the Royal Society B is the Royal Society’s flagship biological research journal, dedicated to the fast publication and worldwide dissemination of high-quality research. The criteria for publication selection are: work of outstanding importance, scientific excellence, originality, and interest to a wide spectrum of biologists.

Read the full paper co-authored by Dunlap and Ragazzi in the Proceedings of the Royal Society B here.