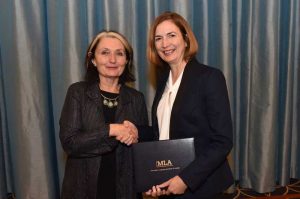 The selection committee’s citation for Lambright’s book reads, “Anne Lambright offers a versatile analysis and discussion on the role of literary works, films, theater, and performance in a nation engaging critical and intellectual dialogues on memory, trauma, gender, ethnicity, and political history in Andean Truths: Transitional Justice, Ethnicity, and Cultural Production in Post–Shining Path Peru. Lambright creatively brings together approaches from trauma theory; literary, film, and performance studies; transitional justice; and human rights debates, with a keen attention to the historical and sociocultural context of Peru. Original and broadly interpretive, this book is an excellent study of the complex relations among art, literature, politics, and society.”

Lambright said it was a true honor to receive this recognition of her work. “I was one of only two [MLA award] recipients from a small liberal arts college; the rest were from prestigious Research 1 institutions,” she said. “I think this fact speaks to the kind of work possible in a place like Trinity, which deeply values interdisciplinary research and teaching and provides the time and spaces for close interaction among a diversity of scholars.

“Throughout my research and writing process, my thinking about the intersection of ethnicity, human rights, and transitional justice efforts was challenged, refined, and enriched by conversations with colleagues and students in Hispanic Studies, the Human Rights Program, International Studies, and Language and Culture Studies,” Lambright added. “I am extremely grateful to work in such an intellectually rich and stimulating environment, where the kind of interdisciplinary work I do is valued and supported on so many levels.”

Lambright joined the Dean of the Faculty’s Office at Trinity College as Dean of Academic Affairs on January 1 of this year, taking up the position vacated by Professor of Political Science Sonia Cardenas, who was recently named Dean of Academic Affairs and Strategic Initiatives. Lambright will sit on the Curriculum Committee and currently co-chairs the Global College subcommittee of the Bicentennial Strategic Planning Commission.

In addition to Andean Truths, Lambright is the author of Creating the Hybrid Intellectual: Subject, Space, and the Feminine in the Narrative of José María Arguedas and is coeditor of Unfolding the City: Women Write the City in Latin America. She has also published articles on gender, ethnicity, human rights, and national identity in Andean literature and culture. Her current project is a critical anthology and translations of selected human rights plays by Grupo Cultural Yuyachkani.

Founded in 1883, the Modern Language Association of America and its 25,000 members in 100 countries work to strengthen the study and teaching of languages and literature. The Katherine Singer Kovacs Prize was established in 1990 by a gift from Joseph and Mimi B. Singer, parents of the late Katherine Singer Kovacs, a specialist in Spanish and Latin American literature and film who taught at Stanford University, the University of Southern California, and Whittier College. More information on MLA programs is available at https://www.mla.org.