Trinity College Assistant Professor of Language and Culture Studies Rosario Hubert has been awarded an American Council of Learned Societies (ACLS) Fellowship for 2017-2018. The fellowship will enable Hubert to work on her book project, Disorientations: Writing China in Latin America. The project argues that the intellectual discussion of China in Latin America has not taken place within academia, but rather in a network of discourses around criticism, the literary market, fiction, and diplomacy.

“I am very thrilled to have obtained this prestigious fellowship because it is not strictly about my own field of specialty, but rather the humanities in general,” Hubert said. This year, 71 fellows were selected through ACLS’s multi-stage peer-review process from a pool of nearly 1,200 applicants. 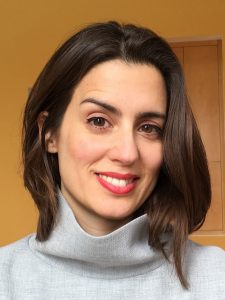 Hubert received her Ph.D. at Harvard University, where she began this book project as her dissertation. As a native of Argentina, Hubert said she has always had an interest in relations between regions of the world not immediately connected. “It’s common to think of connections between Latin America and other regions of historical significance like Europe and the United States, but it is not usual to find connections between Latin America and Asia or Africa,” she said. When it comes to literature, Hubert noted, connections are usually mediated by the literary market in Europe or the English-speaking world.

Hubert’s project focuses specifically on bridging the gap in scholarship between Latin America and China. Her project involves tracing different historical moments which see an increasing interest in writing about China. For example, Hubert noted that in the 19th century, a significant amount of fiction and journalism discussed China due to the large waves of immigration from that country at the time. That is also the case with the creation of the Peoples Republic of China in 1949 and the emerging discourses of the Third World, Hubert said. By scrutinizing 19th-century ethnographies, modernist translations, Maoist print culture, concrete poetry, and contemporary narrative, this project gathers an unprecedented archive of China in Spanish and Portuguese, and proposes a comparative entryway into the study of Asia and Latin America.

For the next chapter of her book project, Hubert plans to write about intellectuals who traveled to China in the context of the Chinese Revolution and who then returned to publish what they had learned and experienced during their time in China. Hubert analyzes both the historical aspect of these publications and the rhetorical strategies of their translations. She notes that many translations were not direct but rather done through English or French first. What we see today, she argues, is an increase in direct translations between Chinese and Spanish because of the new generations of scholars trained in Chinese studies.

Hubert said that she hopes that her work will “provide questions and answers that not only relate to this topic, but that explain how culture circulates in general and how geographical distance is a category worth analyzing between when looking at world literature.” Hubert noted that this fellowship is a very valuable platform to help make her work visible beyond her own field of study and to help her speak to a larger audience in the humanities.

The American Council of Learned Societies is a federation of national scholarly organizations that are dedicated to the promotion of research, publication and education in the humanities and related social sciences. One of the Council’s primary activities is to advance academic inquiry through the awarding of its prestigious fellowships. Last year, ACLS awarded more than $18 million to more than 300 scholars across a variety of disciplines.