Vijay Prashad Featured in Project About History of Nonaligned Movement at ‘documenta 14’ Festival in Kassel, Germany

Vijay Prashad is used to sharing his expertise on television news segments and in documentary films, but he said he has never been a part of anything quite like the unique art installation in which he is featured this summer. 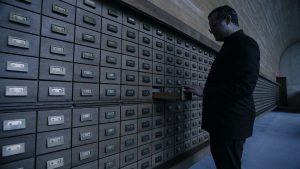 Vijay Prashad in a scene from Two Meetings and a Funeral, a multi-channel digital video installation on display through September 17, 2017, at documenta 14 in Kassel, Germany. ​

Prashad, the George and Martha Kellner Chair in South Asian History and Trinity College Professor of International Studies, is a central subject in Two Meetings and a Funeral, a multi-channel digital video installation created by writer and artist Naeem Mohaiemen about Bangladesh and the Third World Project, shown at the contemporary arts festival documenta 14 in Kassel, Germany. The piece was commissioned by documenta 14 and co-commissioned by Sharjah Art Foundation and Ford Foundation Just Films. The installation is on display at documenta 14 in Kassel until September 17 and will then be brought to art galleries around the world.

A premiere venue for innovative installation art, documenta was founded in 1955 by an artist who wanted to help erase the sting of Nazism after WWII. “Documenta means to document something,” Prashad said. “It’s held in Kassel every five years and is probably the biggest arts festival in the world. It runs for 100 days and takes up the entire city. Over a million people come to see it.”

The 85-minute Two Meetings and a Funeral tells the story of a pivotal time in the history of Bangladesh. In 1971 and 1972, after Bangladesh won its independence, founding leader Sheikh Mujibur Rahman sought out international allies at the Non-Aligned Movement summit. “Mohaiemen was interested in the fact that there was a very important conference held in Algiers in 1973, which was the first time his native country of Bangladesh came into the world spotlight,” Prashad said. The next year, Rahman went from the socialist perspective of the NAM meeting to its ideological counterpoint, the emergence of a strong Islamic perspective at the 1974 Organisation of Islamic Countries (OIC) meeting in Lahore, Pakistan. These meetings, which are referenced in the film’s title, form the backdrop of the installation.

Two courses that Prashad teaches at Trinity – “Global South” and “Global Ideologies” – discuss historical topics that are central to the film. “The issues in the film are at the heart of these classes,” Prashad said. Mohaiemen knew that Prashad also examined these subjects in his book, The Darker Nations: A People’s History of the Third World (2007), and invited him to be a part of the film. “I thought this was going to be a straight-up documentary, but he’s not a straight-up filmmaker,” Prashad said of the director. “It’s kind of an art film, and it’s very beautiful. This blurs the lines between fiction and nonfiction, art and politics, which is what makes it such a wonderful film.” 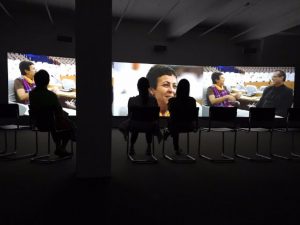 Two Meetings and a Funeral is a three-channel digital video installation in which three video images are projected simultaneously on side-by-side screens.​

The three-channel format of the installation means that three digital film images are projected simultaneously on side-by-side screens, providing the viewer with a visually complex experience and a unique perspective on time and place. Prashad described one scene that he felt made especially good use of the format: “On one screen, I am interviewing someone in French in the room where the Algiers meeting occurred. On another screen you have the subtitles. In the third screen is the archival footage from the actual meeting. It’s very cleverly done.” The New York Times described the piece as “brilliantly woven.”

A four-evening seminar in August called “The Parliament of Bodies: Rebuilding the Idea of a Global Left” featured the filmmaker and three people who appear in the film engaging in conversations about politics. Mohaiemen and Prashad were joined at the seminar by Bangladeshi politician Zonayed Saki and Algerian ecofeminist and archaeologist Samia Zennadi. “It was a great audience. People came from all walks of life and they asked really serious questions,” Prashad said. “It was quite interesting to have four nights of very good discussion.”

Prashad said that he would welcome the opportunity to continue these conversations at Trinity. “It would be great to have a showing of this film in Hartford,” he said.