When Pejay Lucky thinks back to the countless tours he gave of the new Crescent Street Townhouses, he remembers watching students use their cell phones to call friends right then and there to share their thoughts.

“The students are really excited,” says Lucky, Crescent Street’s area coordinator. “They’re going to be living with their friends in a great space.” 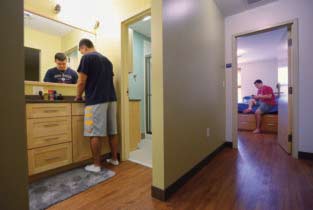 The first phase of the townhouses, which feature apartment-style living chock-full of amenities for about 200 seniors, juniors, and sophomores, opened this fall to rave reviews. Phase two, with beds for 150 more, is set to open in spring 2014.

The project was created with today’s student in mind, says Brian Cohan, a senior developer with Kirchhoff Campus Properties of Pleasant Valley, New York, the developer of the project. “The level of amenities that students want is much higher today than when we went to college,” he says.

Each three-story suite houses eight or nine students, who share three full bathrooms (one on each floor), a living room with dining space, and a kitchen featuring stainless steel appliances, including a dishwasher, range, microwave, and full-size refrigerator. Each air-conditioned unit also offers wireless Internet access and a washer and dryer. 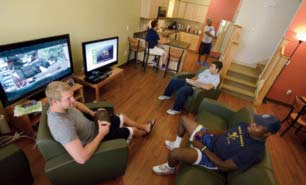 The suites offer yet another housing option for Trinity’s students, above and beyond the traditional first-year residence hall with shared bedrooms and hall bathrooms. As students get older, they can progress fromtandard first-year housing to Crescent Street, making an important step toward independent living.

“The students really will have to take care of it as if it’s their own apartment,” Lucky says. “But at the same time, they’ll have the college experience of living with people and having that sense of community.” 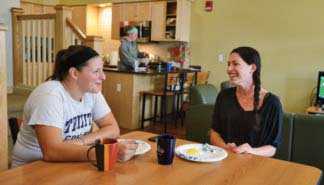 While the advantages for students are obvious, benefits for the College and the surrounding neighborhoods exist as well, says Paul Mutone, Trinity’s vice president for finance and operations. Tentative plans include moving the campus bookstore to the site and adding a Starbuck’s café. Already in place is a new Hartford Police Department substation at New Britain Avenue and Broad Street in a building owned by the College.

Cohan notes that the project also serves to develop a piece of campus that Trinity had not
developed. Lucky concurs. “I really feel like that area is going to be brought to life,” he says. “With everything new, I think there will be an influx of students wanting to be in that area.” Adds Mutone, “It’s high-quality new housing, something we have not had since the late 1990s, and it’s allowing us to remove some old residence halls that were inefficient and costly to maintain.”

The new buildings are Trinity’s first to be LEED certified, says Mutone. LEED, or
Leadership in Energy and Environmental Design, provides third-party verification of green buildings. Cohan says the Crescent Street Townhouses aimed for LEED Platinum, the
highest of the rating levels, in addition to meeting Energy Star 3 criteria.

Mutone says the project is one of several that have helped to revitalize the campus, and with Crescent Street, Gallows Hill, and Vernon Social all coming on the heels of the renovation of the Gates Quad, the College is moving in a positive direction. Says Mutone: “There is clearly a sense of energy and excitement happening here on campus with all of these physical plant changes.”