Emma Jesberg ’13 may have her future “buttoned up” already. Inspired by a pair of her mother’s earrings, made from mother-of-pearl buttons, Jesberg began crafting her own jewelry during the summer of 2010. When friends saw the earrings, they asked Jesberg to make sets for them, and they began telling others. Word spread and Jesberg’s hobby became a part-time business. Sales of her Button Up earrings grew when she began selling them online. As an undergraduate, she treated the business as a sideline to her education, but in the past three years, she’s sold more than 150 pairs of the earrings, and she’s determined to explore her product’s fullest potential.

Sabastion Archibald-Kimmel ’13 has developed two Web sites that reach out to fans of emerging musical artists in hip yet sometimes overlooked genres such as electronica and neo-disco. One site promotes artists produced by Slam Recordings, an independent San Francisco label, three of whose artists the Trinity alumnus has helped manage. Last year Archibald-Kimmel and a friend also launched WallflowerFood, a Web site that he describes as a platform for emerging artists. The site offers playlists, featuring the kind of artists produced by Slam, designed to enhance a wide range of human activities, from work to celebration.

Elizabeth “Ebbie” Koelle ’13 and Madeline “Maddy” Petrini ’13 designed a line of pillows embroidered with lyrics from rap recordings that are popular among their peers. Koelle and Petrini hope that their “Wait, What?” Pillows will be the first products in an expanding line of home décor accessories for young women living in dormitories or small apartments.

All four recent Trinity alumni are pioneers–part of an inaugural cohort of young businesspeople participating in the launch of a new Career Development Center program designed to  nurture entrepreneurship. The young innovators showcased their products and ideas and discussed their business strategies during a spring 2013 program, the first in a series leading to an upcoming entrepreneurship competition. And they helped shed light on a career trend that is championed by J. Violet Gannon, who became director of Career Development last February. 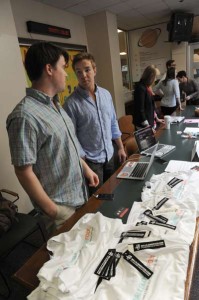 Gannon, former assistant dean of the College at the University of Chicago and director of that university’s health professions program, has a longstanding interest in entrepreneurship. At Chicago she supported a variety of programs designed to increase opportunities for experiential learning, encouraging students to engage creatively and critically with complex issues through substantive work “on the ground.”

Gannon reached out to student entrepreneurs at Trinity soon after her appointment as director of Career Development. “It’s important for the Center to think innovatively,” she says. “In this vein, I wanted to develop an entrepreneurship competition not only to celebrate those students who have created their own companies but also to highlight the skills entrepreneurs need to succeed. They are skills all students can use to market themselves and their ideas in an extremely competitive job market.”

The presentation by young entrepreneurs last spring set the stage for a more formal program that will debut this fall. Following an informational session early in the semester, teams of students will compete during the course of the school year. The competition will begin when the student teams present initial proposals for their ventures, which could range from social innovations to for-profit businesses.

A jury of alumni entrepreneurs will evaluate the student proposals, looking for originality, feasibility, and sustainability. After this initial screening, eight teams will receive $1,000 in seed money to develop their ideas. In addition, each team will be paired with an alumnus or an alumna who is a successful entrepreneur. Those alumni mentors will consult with their teams throughout the competition, guiding the students as they develop comprehensive business plans.

At a special spring program, the eight finalists will deliver 20-minute presentations to the
judges and the greater Trinity community. The winning team will be awarded $5,000 to put its business plan into action. “During the winter and spring, as the teams are developing their business plans, we’ll hold a series of workshops covering such topics as business plans, marketing and communication, and the meaning of success,” Gannon says. “One goal of the competition is to support students, like those who took part in our presentation last spring, who have already created products and are discovering, on their own, how to build their own businesses.” But there are other goals, too.

“By engaging successful alumni in support of the student teams and conducting the competition throughout the school year, we hope to build a culture of innovation and entrepreneurialism,” she adds. “Though they may not be launching businesses in the sense that the students on the competing teams hope to, each student at Trinity is responsible for the business of his or her career. We have a responsibility to all of them, and they all can benefit from exploring how entrepreneurs succeed.”

Well-rounded
Of course, the young entrepreneurs who presented their products last spring are not quite
ready to let their careers hinge entirely on their nascent businesses. Some have hedged their bets by exploring other job opportunities while continuing to develop their businesses on the side. But all of the students are quick to articulate the value they have derived from creating innovative products and learning how to market them. 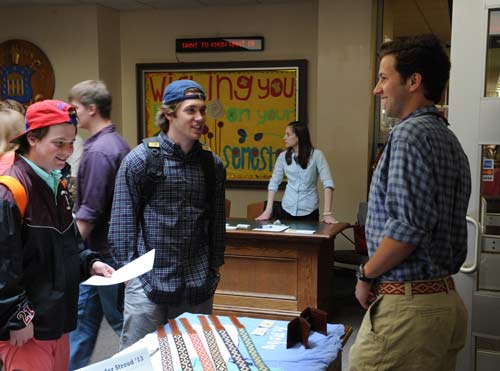 Alex Stroud ’13, another of the young entrepreneurs who participated in last spring’s program, developed his company’s products–a line of high-quality belts, wallets, and other accessories–after visiting Argentina during his time at Trinity. His company, La Matera, sells its products through its own Web site and at a growing network of boutique retail stores. “La Matera has been a terrific learning experience,” says Stroud, who is in partnership with his older brother. “We’ve overcome a lot of challenges in figuring out how to manufacture and sell our products. It certainly hasn’t been easy, but we’re having success, and we’re having a lot of fun. We’re very optimistic about what La Matera can become.”

Koelle, who majored in history, describes herself and her partner, an American studies major, as “quintessential examples” of how a great liberal arts education can help start a career. “Nothing about our majors narrowly defined us for specific careers,” she says. “We know how to write and communicate effectively. We know how to do research and synthesize information. We can find the resources we need to solve problems. Trinity teaches you how to be well-rounded, and that’s one way of looking at successful entrepreneurs.”

To volunteer as a judge or team mentor, please contact the Career Development Center at 860-297-2080 or at careers@trincoll.edu. For more information about the Trinity entrepreneurs and their products, visit their Web sites: