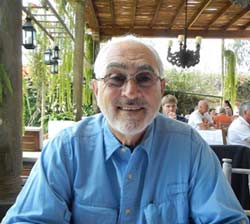 REPORTER: How did you decide to get into medicine?
TSAIRIS: I was always interested in science, and when I graduated from Trinity I knew I wanted to study medicine. I applied for a scholarship from Columbia, and I was fortunate to receive a grant to do research in neuroscience and became involved in the rapidly evolving field of neuropharmacology. I transferred from the pharmacology Ph.D. program to study medicine at Cornell University Medical College and completed my internship and residency in internal medicine at Georgetown University. Then I completed a residency in neurology at the Mayo Clinic. Subsequently I trained at the National Institutes of Health at Bethesda, Maryland. I was chief of neurology at the Hospital for Special Surgery for more than 20 years. At the end of my career, I was a practicing clinical neurologist.

REPORTER: When did you and your wife, Aphrodite, create The Alexia Foundation?
TSAIRIS: Our daughter, Alexia, was a junior at Syracuse University’s S. I. Newhouse School of Public Communications. She aspired to be a photojournalist, and she was very talented. She spent the fall semester in 1988 studying photojournalism in London. However, that remarkable educational experience almost didn’t happen. Just before she was scheduled to leave for England, she developed meningitis. She almost died, but she was determined to go abroad, and she had a very strong will. She recovered and went to London and had a great experience there. Professor Donald Sutherland, who was her adviser, said that her professors and peers in London had selected her as the most promising photographer in the group. He said Alexia had the best documentary  presentations and achieved the highest grades among the photography students in the international program.

She had completed the semester in London and was returning to the United States on
December 21, 1988, when the plane she was aboard, Pan Am 103, was destroyed by a terrorist bomb over Lockerbie, Scotland. We were, of course, devastated, but we’re not the kind of people who crawl into a shell. We spent a couple of months talking about how to make Alexia’s tragic death into a positive thing. She had strong convictions about photography and social injustice. She was very attracted to the contrast between light and dark. In fact, she wrote us a letter from London in which she said, “Never fear the shadows. There’s always a light shining nearby.” So, in 1991 we established The Alexia Foundation for World Peace to keep her legacy alive.

REPORTER: What sort of work does The Alexia Foundation support?
TSAIRIS: The foundation supports and encourages photojournalists to produce stories that drive change. We believe in the power of photojournalism to give voice to social injustice, to respect history lest we forget it, and to understand cultural difference as our strength, not our weakness. Through grants, scholarships, and special projects, the foundation supports photographers as agents for change. The foundation has a student competition with the modest purpose of developing documentary photojournalists. We hope to incentivize young photographers to be good students, develop their craft, and chronicle social injustice. As the foundation grew and evolved, we sponsored workshops on photojournalism and expanded the scope to a professional grant competition. We also established the Alexia Tsairis Chair for Documentary Photography at Syracuse’s Newhouse School.

Since its inception, The Alexia Foundation has awarded grants to 150 photography students and 20 professional photojournalists producing 134 funded projects. In return, the foundation and its photographers have been recognized with many awards. We have amassed an extraordinary collection of photographs with subjects from all over the planet. Our photographers’ work has covered such diverse subjects as cruelty and violence toward civilians during civil war in Sierra Leone, the exiled children of Tibet, the negative environmental impact of an oil pipeline in Chad, female mutilation in Africa, and prison reform in Texas. The work of the foundation has won many awards, including the prestigious Alfred I. DuPont-Columbia University Award. We strive to find images that will have a profound, socially significant impact. We encourage the photographers with whom we work to try to do more than simply tell a story through their photography. We hope their
work will inspire actions that will improve lives.

REPORTER: What have you learned from your work with The Alexia Foundation?
TSAIRIS: After our daughter’s tragic death, it was important for us to work toward missions. We felt a powerful responsibility to actualize, as much as possible, what she was unable to achieve. We feel that we’ve accomplished that in ways we could not have  imagined when we set out to create The Alexia Foundation 23 years ago. In 2006 we produced a book, Eyes on the World, that contains 15 years of photojournalism stories on social injustice. In the introduction, Aphrodite and I wrote, “Almost every picture that crosses the sights of the Alexia competition judges has a component of hope. Hope is a lifeline. We get interested, excited, fascinated, reinvigorated. For hope is the road to survival.” Now it’s seven years later, and we still feel that way.

A few years ago, I began to experience some health issues, and I surrendered my medical practice to give more of my time and energy to my family. I’m still very engaged with the foundation, however. All of us in the Tsairis family are. The Alexia Foundation has been a great source of strength. It constantly reminds us of what Alexia said: “There’s always a light shining nearby.”