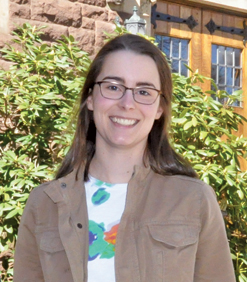 With competition from the top colleges in the nation, the Barry Goldwater Scholarship is among the most prestigious awards for students who wish to pursue research in scientific fields. Adding her name to the list of winners is Kathryn Powers ’17.

Powers, a biology and biochemistry double major from Arnold, Maryland, works with Thomas S. Johnson Distinguished Professor of Biology Daniel Blackburn on biology research that she began through the Interdisciplinary Science Program. Her application essay for the scholarship highlighted the research she has conducted using scanning electron microscopy to study developmental anatomy of reptiles.

Powers has worked in Blackburn’s lab as a collaborative researcher for three years. He said that Powers is a mature and highly skilled researcher who has demonstrated the ability to carry out a challenging project from start to finish. “Kat quickly gained great skill in using highly sophisticated lab instrumentation, notably the Zeiss electron microscope that we acquired under a National Science Foundation grant,” Blackburn said. “Through her use of this instrumentation, she has made a significant set of discoveries that are certainly worthy of publication in the literature.”

Beyond the scholarship, Blackburn said that Powers has made contributions that, with further research and investigation, could be groundbreaking in providing a basis for more discovery by Trinity students and researchers at other colleges. “Kat’s scientific observations have the potential to refute common assumptions in the embryological literature about developmental mechanisms and their evolution,” Blackburn said.

Powers presented work this past summer at the International Congress of Vertebrate Morphology in Washington, D.C. She plans to pursue a Ph.D. after graduating from Trinity.