A gift of art 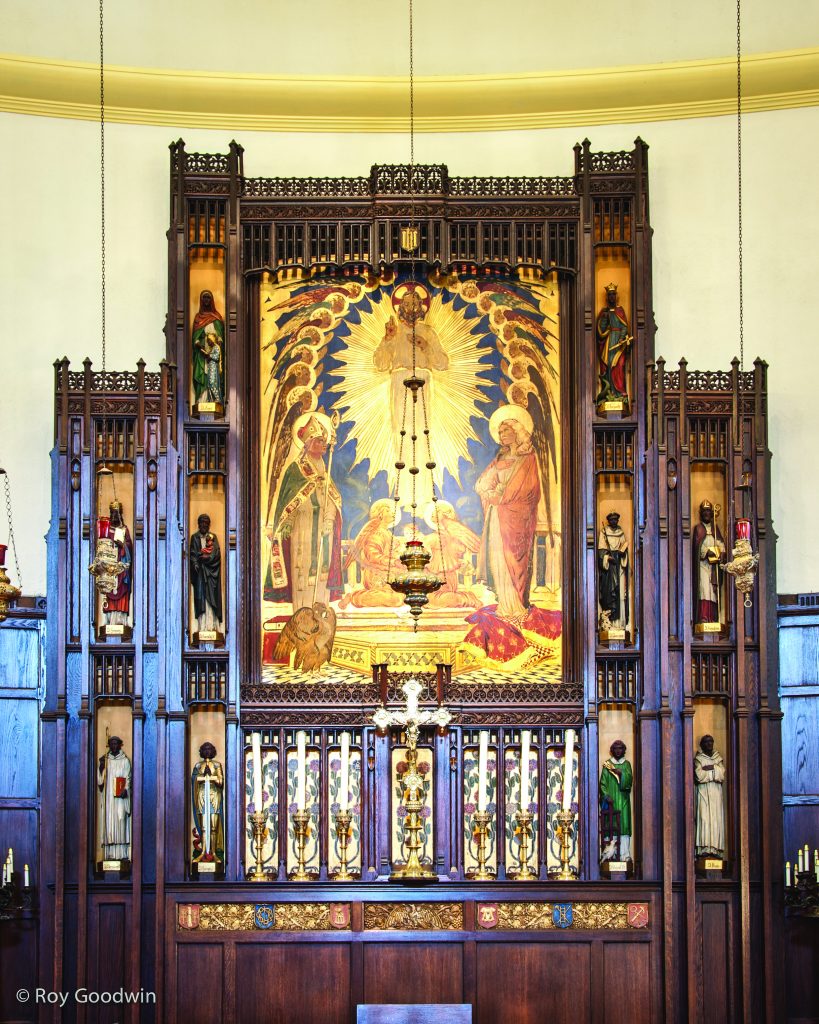 Trinity College has received a gift of large liturgical furnishings and artwork from a church in Boston, bringing the iconic Gothic Revival Chapel closer than ever to the full realization of the artistic vision cast by its principal architect, Philip Frohman, more than 85 years ago.

St. John the Evangelist Church (Episcopal) in Boston recently merged with the Cathedral Church of St. Paul, ending its century-long presence in its building and requiring new homes for all of its striking and ornate interior architectural appointments. According to Trinity College Chapel Curator Christopher H. D. Row ’91, M.Div., Ph.D., the position of St. John’s Church in the history of the American Gothic Revival style is significant. “Henry Vaughan and Ralph Adams Cram —  two of the greatest Gothic Revival architects of the third phase of the American Gothic Revival — were not only parishioners at this church … but they contributed their artistic talents to the fabric of the building itself.” The works of liturgical art being given to the College are a 24-foot-tall high altar reredos, or altarpiece, by Cram; a Lady Chapel altar and reredos by Cram; a Vaughan screen with four sculptures; a set of Cram screens; and a 14-foot-tall great rood (hanging crucifix) by Vaughan. Martin Mower painted the central panel of the high altar reredos.

Coincidentally, the Trinity Chapel was designed to house precisely this type of artwork, which has been lacking since the building’s original construction. “The Chapel was the gift of William Gwynn Mather in 1928,” Row said. Mather’s initial bequest was for the building; its adornment with wood carvings, stained glass windows, and more; and its maintenance into the future. When the Great Depression arrived in the midst of construction, the decision was made to complete the building itself, leaving its adornment for later generations to complete. That time has finally come.

The Reverend Allison Read, College chaplain, said, “When St. John’s became aware of this space in all of its particularities, they were thrilled. There are not a whole lot of buildings of this kind and of this scale. These pieces fit here as if they were made for it: the style, the materials, the iconography, the architects, the artists themselves. These artists worked with Frohman during his lifetime. The architect intended for this building to be furnished precisely in this way.”

The objects are being stored on site while a project outline, including a proposed time frame for the installation, is developed. One piece, however, is already on display: the central panel painting by Mower is hanging behind the altar on the east wall, where the full high altar reredos eventually will be installed. The Lady Chapel altar and reredos will be installed in the Friendship Chapel, and the screens will be installed at the west end of the choir.