In the film Skin Deep, Tammy, the white student at Texas A&M, shows key signs of the pseudo-independent stage of white racial development. According to Beverly Tatum, author of “Why Are All the Black Kids Sitting Together In the Cafeteria?”, in the pseudo-independent stage “the pseudo-independent individual has an intellectual understanding of racism as a system of advantage, but doesn’t quite know what to do about it. Self-conscious and guilty about one’s own Whiteness, the individual often desires to escape it by associating with people of color” (Tatum 106). In Skin Deep, Tammy discusses how she tries to reach out to the African American community at Texas A&M: “I wanted to have more contact with the African American students on our campus… so I joined black awareness committee for the social thing because right now my group of friends isn’t very diverse and I felt like maybe I would take the first step and maybe they would join some of ours [organizations]” (20:38-21:00). Like Tatum’s pseudo-independent individual, she wanted to be able to understand the African American community at her school. After the conference, Tammy acknowledges the advantages she receives because she is white: “I’ve come to realize that if I work hard for something I’m assured most of the time that I’m gonna get it… I’ve come to realize that for some other cultures in our society that’s not true a lot of the time and they have to work twice as hard and there’s people there telling them that they can’t do that” (32:02-32:25). Later, when she talks to Dane, she tells him that although creating a dialogue about race is difficult, it’s necessary because “if you’re not trying to make the change then you’re just accepting it and letting it go on.” 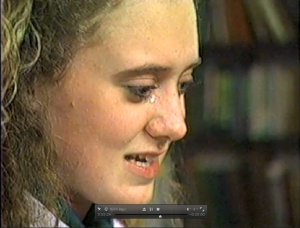 Tammy wants to change the system, and she is trying to convince others of that fact. Based on the film, Tammy is in the pseudo-independent stage of her racial development.

Tatum, Beverly D. “Why Are All the Black Kids Sitting Together in the Cafeteria?”: And Other Conversations About Race. New York: BasicBooks, 1999. Print.