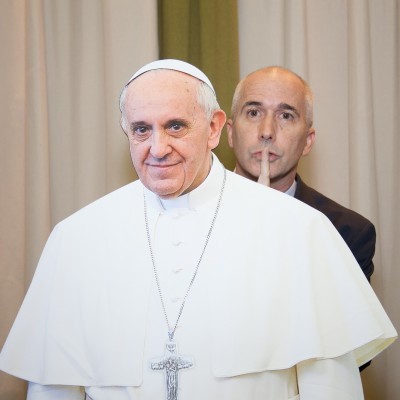 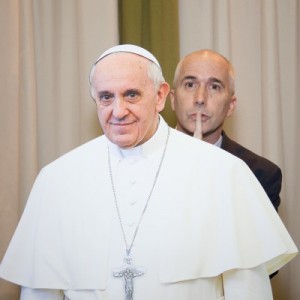 Tight security, careful orchestration, and anticipated criticism kept Pope Francis from indulging his usual penchant for speaking off the cuff and wading into crowds, veteran religion reporter David Gibson told a lunchtime gathering of Trinity students and faculty on Tuesday, Sept. 30. But by the end of his first trip to the United States, the “people’s pope” succeeded in making the visit his.

It was 10 o’clock on Saturday night, and Francis had been sitting on stage at the huge mass for families on Benjamin Franklin Parkway in Philadelphia listening to a seemingly endless succession of musical performances. “He got up and tossed aside his speech and gave a 25-minute riff about the family, about the beauty of the family,” Gibson said. It was an amazing kind of performance.”

Gibson, who covers all things Catholic for the Religion News Service, came to Trinity at the invitation of the Greenberg Center in between following the pope around the East Coast and going to Rome for the upcoming Synod of Bishops. He offered both an inside look at what’s like to cover a papal media event with a press corps of 8,000 and an expert’s view of a papacy that has reversed decades of conservative trending in the Catholic church.

He spoke of the particular attraction Francis has had on Catholics worldwide, stating that “he’s not coming out here and telling people, ‘You have to do as I say.’” Rather, he takes the “classic Jesuit approach,” which is reflected in his unwavering ability to show mercy.

Not that Francis is a pushover. But, said Gibson, he reserves his tough talk for Catholic bishops and priests, who he feels must be more “inclusive” and refrain from passing judgment on those that lead lifestyles not completely in keeping with church ideology.

Gibson, who once worked for Vatican Radio, took aim at those who claim that the pope has merely changed the Vatican’s style while leaving church teachings the same as ever. On the death penalty, he has gone beyond previous doctrine in advocating global abolition and opposing life without the possibility of parole. And in his speech last week at the United Nations, he went beyond his own environmental encyclical, Laudato Si’, in declaring that the environment has its own right to be protected.

But in response to a question, Gibson said he didn’t such changes would lead to a schism in the church, as some conservative commentators have suggested.

He criticized the Vatican for scheduling the pope’s meeting with victims of sexual abuse at the end of his trip, which left the issue to fester for days. Francis’ readiness to suspend judgment — to the extent of complimenting the American bishops for their handling of the abuse crisis — seems of a piece with the touchstone remark of his papacy so far, his response when asked if a gay man could serve as a Catholic priest: “Who am I to judge?”

Nothing better explains his rock star appeal to Catholics and non-Catholics alike.

Here’s the video of Gibson’s talk.