Today’s “Books” discussion on Tom Ashbrook’s radio program “On Point” features Armand Leroi, professor of evolutionary development biology at Imperial College (London). Professor Leroi explain the core assertions of the new book “The Lagoon: How Aristotle Invented Science” and responds to the calls and online comments of listeners to the show. You can also read an excerpt from Professor Leroi’s book on the “On Point” website.

Uma Thurman is no stranger to Greek myth, having played Medusa in Percy Jackson and the Olympians: The Lightning Thief. This past summer, she starred in a short film, “The Mundane Goddess” Thurman plays a modern-day Hera driven to therapy in this prize-winning project from the Jameson First Shot filmmaking competition.

This story courtesy of Professor Jonathan Elukin in the History Department:

What’s the way to see classical art—by the year or by the theme?

For a century, Boston’s Museum of Fine Arts has chronologically organized its collection of ancient Greek art, dated largely between the 6th and 4th centuries B.C. But on Tuesday, the museum will open three interconnected permanent galleries, in renovated space, which will feature 230 pieces thematically divided into “Homer and the Epics,” “Dionysus and the Symposium” and “Theater and Performance.”

“These themes are at the heart of Greek culture,” says the museum’s curator of Greek and Roman art, Christine Kondoleon.

Bob Mankoff, the cartoon editor of the New Yorker, regularly posts a newsletter online. This week, his dispatch highlights the world’s oldest joke book: the Philogelos, or “Laughter-lover” which was written in Greek. Mary Beard, one of the most famous and prolific Classicists alive, agreed to discuss some of the jokes for his newsletter, starting with one delivered recently by a British stand-up comic:

“A few years ago, the English standup comic Jim Bowen presented a show with jokes that were based entirely on the one surviving ancient joke book, the Philogelos. It’s a collection of some two hundred and sixty short gags, written in Greek; it probably dates, in the form we have it, to the fifth century A.D., but some of the jokes go back centuries earlier. I particularly like the one about the thuggish, philistine Roman who destroyed Corinth in 146 B.C. When he was overseeing the transport of the precious antiques that he had looted from the city, he said to the ships’ captains: ‘Don’t break anything, or you’ll have to replace it.'”

Read on, at the NewYorker.com.

As Robert Ito reports in the 8/30/14 issue of The New York Times, Toon Books has released a comic book retelling the famous Greek myth “Theseus and the Minotaur” by Yvan Pommaux, and Daniel Tandarich’s fifth-grade students at Brooklyn’s P.S. 124 love it! 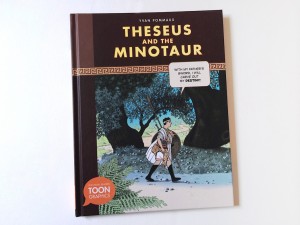 This pedagogical experiment affirms the vision of Francoise Mouly, the New Yorker‘s art editor and creator of Toon Books. Soon Toon Books will release a retelling of Orpheus in the Underworld!