In spring 2020, Zeta Kappa, Trinity’s chapter of Eta Sigma Phi, inducted a record 20 students! Eta Sigma Phi is an honorary organization, chartered in 1914 with ancient Greek motto φιλοσοφοῦμεν καὶ φιλοκαλοῦμεν, which means, “We are lovers of wisdom and beauty!” It recognizes undergraduate student achievement in ancient Greek and/or Latin taken at the college level.

Eta Sigma Phi’s coat of arms. emblazoned with, on the upper right-hand side, a lamp that represents the light of learning; on the lower-hand side, a pyramid that represents antiquity. The ancient Greek phrase Φρόνις ἐστί δύναμις appears on the bottom, meaning “Thought is power.” 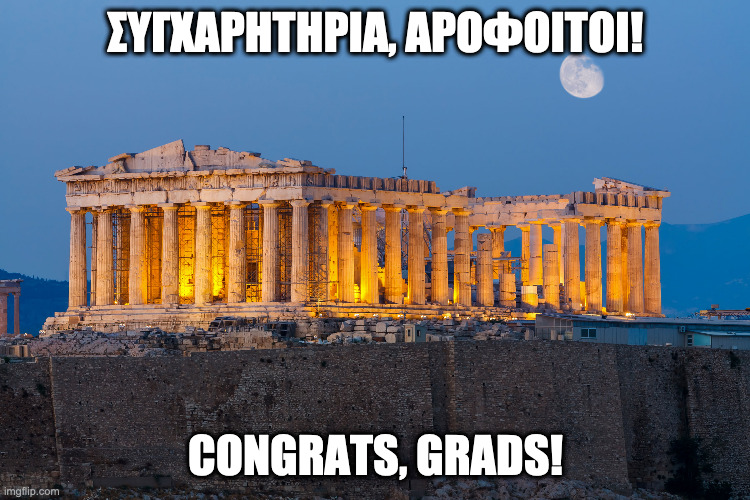 Spring 2020 was a very difficult semester, but four students majoring in Classical Studies rose to meet the challenge and graduated!

Whitney Hall graduated with majors in both Classical Studies and Religious Studies. This year, she was inducted into Eta Sigma Phi, in addition to being a leader in Trinity’s Life Design fellowship. She was a participant in Dr. Risser’s on-going excavation project in Akko, Israel in 2019. In the future, she looks forward to pursuing her interest in digital marketing.
Trea Mannello was Classical Studies’ Presidential

Scholar for 2019-2020 and President of Zeta Kappa, Trinity’s chapter of the honorary undergraduate society Eta Sigma Phi. She graduated with majors in Classical Studies and in Anthropology.

. which she found complemented one another: “Through my coursework in both fields, I obtained a more holistic view of the origins of democracy, political philosophy, and the key themes and motives of war.” She wrote her senior thesis about the behavior of the mortal king Tantalus, who was punished by the gods for attempting to feed them his own son! She was inducted into Eta Sigma Phi. We wish her the best at her new job at as a corporate paralegal at Simpson, Thacher, & Bartlett, LLP in NYC. In the future, she intends to attend law school, for which knowledge of the classical world (especially Latin) will benefit her.