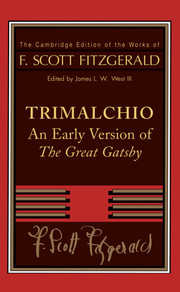 Having recently covered superlative adjectives in Latin 102, this Loreal ad was quam felicissimum (though I can’t vouch for the quality of the eyeliner itself)! 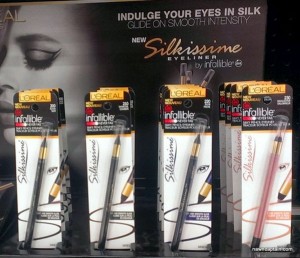 Recently we reached the 10th anniversary of the premiere of ABC’s blockbuster series Lost (created by J. J. Abrams). One of the pleasures of the series, for a Classicist: spoken Latin!

When some of the survivors time-travel back to the 1970s on the island, Sawyer and Juliet encounter proto-“Others”, led by Charles Widmore and Eloise Hawking (parents-to-be of Lost physicist Daniel Faraday). In order to prove her “Other” bona fides, Juliet addresses them in Latin to gain their trust. An astonished Sawyer asks “Who taught you Latin?” She replies, “Others 101. Gotta learn Latin. Language of the enlightened.” (Episode 5.3, “Jughead”) 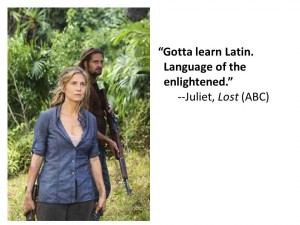 Parks & Recreation‘s Leslie Knope is famous for her super-intense dedication to the well-being of her fellow Pawneeans. When the school board wanted to save money by cancelling senior prom, she came to the rescue. Equally important, when they wanted to cut AP Latin, she volunteered to teach it! 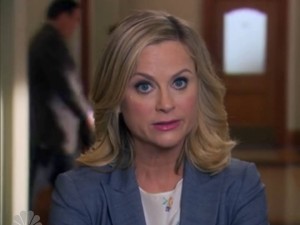 “Which reminds me,” she muses, “I need to learn Latin.”

So say we all, Leslie!

Derek Muller, a professor at Pepperdine University School of Law, recently studied the correlation between LSAT and GRE scores and undergraduate majors.

His finding? Classics majors ranked at the very top of majors, with the highest LSAT and GRE scores!

So if you are looking to go to law school, you simply cannot do better than to major in Classics!

For Muller’s report, see his blog at http://excessofdemocracy.com/blog/2014/4/the-best-prospective-law-students-read-homer.