Newton’s views on science and theology 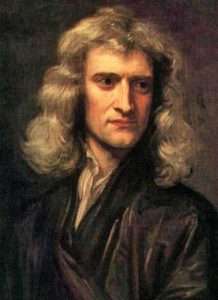 He then takes a swipe at Materialism: “Blind metaphysical necessity, which is certainly the same always and ever where, could produce no variety of things. All the diversity of natural things which we find, suited to different times and places, could arise from nothing but the ideas and will of a Being necessarily existing.” He concludes his discussion of God by saying that science can tell us of the nature of God.

Judeao-Christian thinking had long held that the natural world was law-based. Newton saw his discoveries as vindication of that view. In a famous letter he wrote:

When I wrote my treatise about our system, I had an eye upon such principles as might work with considering men, for the belief of a Deity, and nothing can rejoice me more than to find it useful for that purpose.

Newton saw natural law as sufficient to explain how the world works now, but believed that the world is ultimately artificial, the producted of mental processes. But later thinkers saw this as a lack of imagination and in the second half of the 19th century came to see science as exclusively a search for material causes.