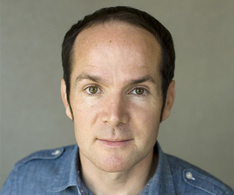 Ciaran Berry, assistant professor of English and director of creative writing at Trinity, is one of 10 writers to have won a 2012 Whiting Writers’ Award, which carries with it a $50,000 stipend.

The honor, issued annually since 1985, is given “not for a specific work, but for the abundant promise of future work,” said Barbara Bristol, director of the program. The awards are bestowed by the Mrs. Giles Whiting Foundation, which has given away more than $50 million, most of it to writers of fiction, nonfiction, poetry, and plays.

The candidates are nominated by people whose experience and vocations have brought them in contact with individuals of extraordinary talent. The winners are chosen by a committee comprised of a small group of recognized writers, literary scholars, and editors who are appointed annually by the Foundation. Both nominators and selectors serve anonymously.

A native of Dublin, Ireland, Berry grew up in County Galway and County Donegal, but has spent the past 15 years living, writing, and teaching in the United States. He joined Trinity’s faculty in 2009.

Berry received his B.A. from the University of Ulster and his MFA from New York University and was awarded a New York Times Fellowship. His work has appeared in AGNI, The Threepenny Review, Ploughshares, The Missouri Review, and The New Republic. Berry’s first full-length collection, The Sphere of Birds, won the Crab Orchard Series in Poetry Open Competition in 2007 and was published by Southern Illinois University Press in 2008. He is working on his next collection, The Dead Zoo.

Berry received his Whiting Award in late October at a ceremony at The New York Times Center in Manhattan. All of the winners read excerpts of their work at the Bronfman Center at NYU the following day. Berry chose two poems from The Dead Zoo.

Gratified by the award and the recognition, Berry said he views it “as validation of all the hours you spend writing on your own and privately, without any assurance that anyone is going to read what you’ve written.”

The list of previous winners of the Whiting Award includes people who went on to snare Pulitzer Prizes and National Book Critics Circle Award. “It feels great to join that list,” said Berry.