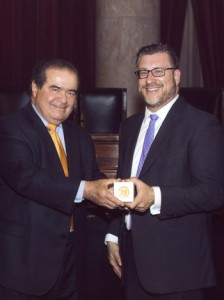 Recently, two faculty members at Trinity delivered addresses to the United States and Connecticut Supreme Courts. Though their talks were just one day apart, the topics they discussed spanned almost eight centuries.
​
In Washington, D.C., on April 30, Kevin McMahon, John R. Reitemeyer Professor of Political Science, accepted the Griswold Prize for his 2011 book, Nixon’s Court: His Challenge to Judicial Liberalism and Its Political Consequences. After an introduction by Justice Antonin Scalia, McMahon spoke on that same topic.

The next day in Hartford, Jonathan Elukin, associate professor of history, was invited to address the justices and guests of the Connecticut Supreme Court for Law Day. His keynote address on the Magna Carta, the theme of 2015’s Law Day, marked that document’s 800th anniversary. The program was broadcast on CT-N.

McMahon’s book was selected for the Griswold Prize in October 2014, the first time since 2009 that a book merited the prestigious award. Many scholars have held that President Richard Nixon failed in his efforts to challenge the liberal approach of the Warren court. In Nixon’s Court, McMahon maintains that Nixon’s strategy was in fact a success from both a legal and political perspective. He argues that Nixon was able to earn the Supreme Court’s endorsement of his highest priorities while simultaneously laying the foundation of an electoral alliance that would dominate presidential politics for a generation. His remarks at the Supreme Court were featured by the high-profile SCOTUSblog. 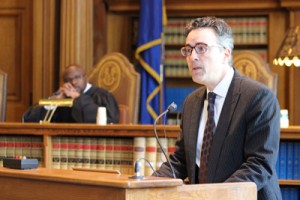 Connecticut Supreme Court Justice Richard A. Robinson looks on as Jonathan Elukin delivers a keynote address on the Magna Carta.

​Connecticut Chief Justice Chase T. Rogers introduced Elukin and spoke of the importance of increasing access to justice. She called the Magna Carta a foundational document that shaped many of today’s legal principles. In his remarks, Elukin discussed how that came to be, originating as a relatively narrow agreement and evolving into a timeless contribution to legal and political thought.

Elukin discussed the history of the Magna Carta – or “Great Charter” – as well as its relevance today. The document originated as a 1215 peace agreement between King John of England and the barons who opposed him, but was reissued by subsequent monarchs and took on added meaning. It established that even the King himself was not above the law and put in place protections from the government for its subjects. When other kings tried to expand the power of the crown, parliament resisted, invoking the Magna Carta as a cry for liberty. The Magna Carta was elevated to such prominence by Sir Edward Coke, a former chief justice who said that the document “defends the common law of England.”

Elukin focused not only on the history of the Magna Carta, but also its relevance today, echoing remarks by Chief Justice Rogers.

“We should not be content just to celebrate this mythic Magna Carta,” Elukin said, acknowledging the document’s role in establishing the rule of law and individual liberty. “We should not be complacent. We need to be ready to defend those hard-won rights.”