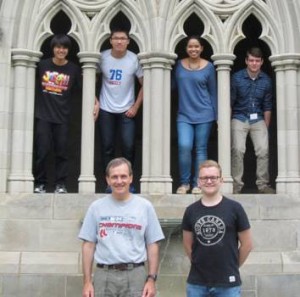 The National Science Foundation (NSF) has awarded a $234,957 grant to Trinity College Professor of Chemistry Timothy P. Curran to examine a potential new method of creating protein shapes called beta-sheets, which may have implications for understanding amyloid diseases like Alzheimer’s disease. Curran is the principal investigator of the project, “RUI: Investigations of a Novel, Bimetallic Ring System for Nucleating Beta-Sheets.”

The beta-sheet protein shape, Curran said, “is found in the protein plaques that form in the brains of Alzheimer’s patients, clogging the brain’s neurons.” With this grant-funded project, Curran plans to investigate how these beta-sheets form and how they might be broken up.

Curran and his undergraduate students have discovered a cyclic, air-stable molecule that includes the metals tungsten and iron, which can position two protein chains next to each other as found in beta-sheets. “We have a model chemical system that we think might be able to generate beta-sheets, and then examine how they aggregate,” he said. “Long-range, this could help combat diseases like Alzheimer’s.”

In addition to funding Curran’s research, the grant also includes funds to support three students for three summers and allows them to travel with Curran. “This grant offers a great opportunity for students,” he said.

Curran, chair of Trinity’s Chemistry Department, spent this past summer working with Trinity students from all over the world. “They were from Trinidad, Great Britain, Indonesia, Vietnam, and Windsor, Connecticut,” said Curran, who is a resident of Wethersfield.

Curran said that his students were partly responsible for leading him to the particular line of inquiry pursued by this project. “This one came about because Allison Lawrence ’10 in my lab made a discovery about this molecule that had a particular shape,” he said. “In our lab, we make molecules that no one has ever made before. A student who makes a new molecule in my lab is the first person in the history of the planet to make that molecule. It’s one of the ways they can be unique.”

Many undergraduate students use their time in Curran’s laboratory to get a sense of what conducting scientific research is like. “They can see if they’re good at it and whether they like it or not,” Curran said. “You have to have a thick skin. Things won’t work all the time, and there are lots of unexpected problems that come up. You see quickly if they like working their way through the problems.”