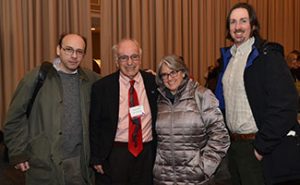 Lauter is the 26th recipient of the March Award, which the MLA’s Association of Departments of English (ADE) established in 1984 “to hold up as an ideal the scholar and teacher who accepts responsibility for strengthening the life and work of departments, the field, and the English studies community considered as a whole.” The award is named after Francis Andrew March (1825–1911), who taught at Lafayette College and was the first professor of English in the United States.

A Trinity College faculty member beginning in 1988, Lauter served terms as chair of the English department and director of American studies, and for many years served as director of the graduate program in American studies. He has served as president of the American Studies Association and is the founding general editor of the groundbreaking Heath Anthology of American Literature, now in its sixth edition, which redirected the field toward a more historicized, inclusive, and self-aware representation of the many voices and origins of American literature.

A contingent of Trinity English Department faculty members, including Chloe Wheatley, associate professor of English and current chair of the department, attended the MLA convention and the presentation of the award to Lauter.

“It was a wonderful experience to sit in the audience with my colleagues from English and hear Professor Lauter express what he took this award to signify about the vitality of our profession,” said Wheatley. “In his acceptance speech, Professor Lauter emphasized, in a characteristically eloquent yet grounded way, how his scholarship has been driven by a concern for social justice.”

“Invoking Marvell and Wordsworth as well as Frances Harper, he spoke of how an emphasis on the democratic virtue of inclusion not only can inspire us to make room, in our anthologies and in our classrooms, for new voices, but also can teach us to understand more familiar texts in new ways,” said Wheatley. “His speech was, in other words, a wonderful emblem of his own unique combination of intellectual intensity and openness.”

In his talk upon receiving the March award, Lauter said, “I take this award to be about the efforts of many of us to forward the project of democracy. Democracy requires inclusion—but not just between the covers of a book. Rather, in the chambers of government and the seminars of learning, where to be unheard is to be ignored and to be ignored is to have your humanity revoked. Some of us long since adopted Garrison’s statement in the first issue of The Liberator: ‘I will be heard.’ And we have brought it not only to the study of literary texts, but to the aspirations and the lives from which they spring. To say ‘Black lives matter’ is to say ‘I will be heard.’” That, Lauter has said to his colleagues and friends at Trinity, “is just one contemporary instance of promoting inclusion and democracy.”

Lauter is the author or editor of several books, including From Walden Pond to Jurassic Park: Activism, Culture, and American Studies and, most recently, A History of American Working-Class Literature. During 1964 and 1965 he worked in freedom schools in Mississippi and in Roosevelt University’s Upward Bound program, and in 1967 he became director of the first community school project in the nation, at Adams-Morgan in Washington, DC. In 1972, he resumed his teaching career at the State University of New York, Old Westbury, an institution that especially served underrepresented groups such as black and Latino students and older women. He was one of the founding editors of the Feminist Press, an educational nonprofit organization founded to advance women’s rights and amplify feminist perspectives, and of the journal Radical Teacher.