Hartford, Connecticut, December 4, 2017 – This semester, Trinity College Professor of Language and Culture Studies Thomas S. Harrington—a noted scholar on the culture and politics of the Catalonian Autonomous Community of Spain—has appeared on local, national, and international news broadcasts to speak about Catalonia’s recent vote for independence and its ongoing confrontation with the Spanish central government.

“This is a nationalist movement about peace, persistence, and inclusion,” Harrington said. “What I think is fascinating, and something I’d like to transmit to students and the public, is the almost David vs. Goliath persistence of this culture. They are, in effect, saying to the world: ‘What we have is very special to us and we want to preserve it, but that preserving it does not mean, as it does in so many other nationalist movements, restricting the influx of outsiders to the country or recurring to supremacist schemas of  identity.’ To me that is an amazing story.” 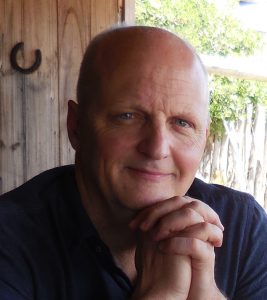 As the Catalan independence process has moved forward, Harrington has been addressing not only classrooms full of students, but also people around the world who want to learn more about what has led up to the current confrontation. He has provided commentary for news outlets including Russia Today, China Global Television Network, and Connecticut Public Radio, and has written many articles and blog posts designed to provide more  historical and cultural context for those seeking to understand the October 1 vote on independence and all that has followed in its wake.

“In the latter part of September, when the situation came to a head, I became more active. My goal was to shed light on historical issues and details that are not often mentioned in the mainstream press,” Harrington said. “Many reporters, working in good faith, simply do not have the historical or linguistic background needed to understand the Catalan issue in an in-depth manner. Most people in big American and European media—at best—speak some Spanish; very few speak and read Catalan or have reported before on a daily basis from inside Catalonia,” he said.

While some believe that this is an unimportant detail, Harrington said that he believes it is absolutely essential to gaining a more solid understanding of this situation and many others like it. “There is no such thing as unbiased media; everything comes from a point of view. Language and historical context, or what we might call our cultural ‘point of entry,’ affect our perceptions of a given reality in significant ways,” Harrington said. “While we cannot necessarily undo the slants that we and other bring to our analyses of social and political events, we can seek to become aware of their possible effects on our perceptions of ‘reality.’”

Harrington believes that current impasse has its roots in Spanish Constitution of 1978, which was forged only three years after the death of Francisco Franco amidst looming threats of renewed military intervention in the civic life of the country. “It was very much a compromise document designed to bring a still fractious country into the community of democratic nations,” Harrington said. “As such, it was seen by most of those signing on to it, and especially those embracing in Catalonia, as being subject to adjustment in the not too distant future. This was the understanding that everyone had until the beginning of the 21st century when the party now in governance, the PP, then headed by Jose Maria Aznar, turned around and said this constitution was sacred and could not be changed and that, therefore, the Catalans could never look forward to any incremental increase of their political power within the Spanish state.” Harrington suggests that it was the articulation of this “hard” upper limit on Catalan political, cultural, and economic aspirations, subsequently ratified in 2010 by a PP-dominated Constitutional Tribunal, which many saw as corrupt, that has led to the current situation.

Harrington’s interest in the problems of nations within states began with his college studies of the borderlands between Poland and Russia. When he began his doctoral work in Hispanic studies, he transferred his interest in the phenomenon to the Iberian Peninsula. In the course of his career, he has lived and or studied in all of the major culture-nations of that geographical and cultural entity, earning his master’s degree in Madrid, teaching for two years in Galicia, studying in Lisbon, spending numerous summers in the Basque Country, and exploring the breadth and depth of Catalonia.

Harrington is the founder and one of three faculty advisors of the Trinity in Barcelona study away program, which offers students the opportunity to spend a semester, summer, or full academic year in the city of Barcelona, Spain. Open to all levels of Spanish language, Trinity in Barcelona is a “hybrid” study abroad program in which students enroll in a combination of Trinity-taught and local university courses as they experience both the Spanish and Catalan cultures.