To kick off Women’s History Month—which this year coincided with Trinity’s celebration of 50 years of coeducation—women’s tennis great Chris Evert joined Trinity Field Hockey Head Coach Anne Parmenter on March 1 in Mather Hall’s Washington Room for a wide-ranging conversation about the evolution of women’s roles in sports and in society. Evert also met in a small-group setting with members of the Bantam men’s and women’s tennis teams and other student-athletes.

Evert, whose professional tennis career began in 1972, reached 34 Grand Slam singles finals—more than any other player in the history of professional tennis. Ranked No. 1 in the world for five straight years, Evert retired at the 1989 U.S. Open and in 1995 was unanimously inducted into the International Tennis Hall of Fame. Today, she serves as a tennis analyst for ESPN; publishes Tennis Magazine; co-owns the Evert Tennis Academy in Boca Raton, Florida, where she is active in coaching and mentoring student-athletes; and raises funds through Chris Evert Charities to improve the lives of at-risk children and families in Florida. She also is chairperson of the Board of Directors of the USTA Foundation, which works to change lives through tennis and education. 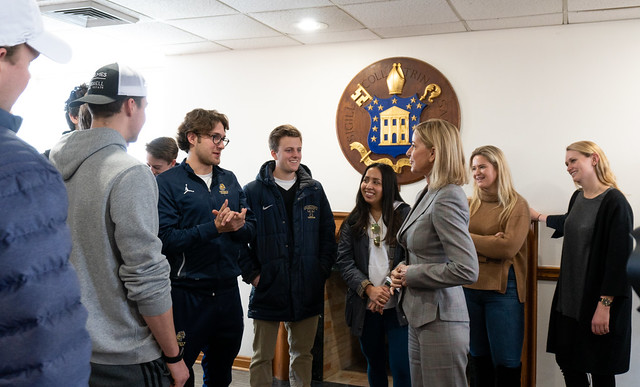