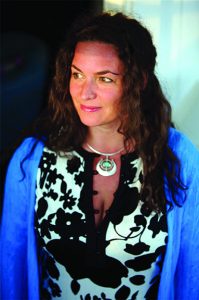 FAVORITE TRINITY MEMORY:The Rome Campus was life changing for me. It was the first time I went abroad, so my eyes and mind were wide open absorbing everything. The campus is beautifully situated on one of the Seven Hills of Rome, the curriculum was exclusively in Italian, the teachers were brilliant, and the students were a riot of fun. We learned by walking the cities of Italy, we ate the best food in the world, and we interacted with locals like we were locals. To be immersed in Roman culture was transformative.

What is FIREFEATURES? A “fire feature” is a term for a decorative gas appliance. FIREFEATURES is a division of parent company Colombo Construction Corp. and my full-service design and build firm that specializes in custom, site-specific work, including Firebowls, water and wind features, memorials, markers, and environmental sculpture.

What led you to create FIREFEATURES? Necessity and a light bulb moment. I worked in the film industry for about 15 years, beginning as a production assistant on Pee Wee’s Playhouse in 1986 and ending as a director with September Films when 9/11 happened. This terrorist event decimated the television industry (among obvious other things) in New York City, and all work dried up. I remember sitting at my beach house in Greenport, New York, in the rain, shell–shocked from the events and wanting to build a fire to consider this particular crossroads in my life. All of my wood was wet and wouldn’t light, so I wished for and visualized an outdoor firepit that could be hooked up to my house gas and that was big enough to feel like a bonfire. I wanted to sit and think and contemplate what was next, as I was no longer willing to have my livelihood dependent on anyone other than myself. As a lifelong pyromaniac, a genetic trait I believe I inherited from my father, a gas bonfire didn’t seem like such a daunting task. As a director, I was always drawing up and creating things we shot for film. It was just another prop in my mind. I also thought it was a good idea. Google didn’t exist then, and I was just getting into internet searches, so after a diligent search for gas firepits, I discovered there was nothing out there. So I made my own. Cut to a few months later, after a fortuitous introduction by a great friend, I sold the first Firebowl to André Balazs, a tony hotelier, for his Shelter Island property, Sunset Beach. With that exposure, a niche was created, and the idea of a decorative outdoor gas appliance took off.

Which projects are among your favorites? Any pure and elegant installation of a Firebowl as I don’t always have control over what people do with them once I sell them. If I see a Firebowl set in a chunky masonry surround with colored Adirondack chairs around it, I get so sad—they are meant to be serene, zen, and plain. I am also grateful for the big installations: The Bridge at Bethlehem Steel, the Branch Twist at the Wharf D.C. and St. Regis in Park City, the cast bronze nests and strangler vines, and projects for a couple of clients with whom I have signed nondisclosure agreements.

Which projects are among the most challenging? Civic installations, not only because it can devolve into design by committee but also because they have many liabilities to consider when installing a fire feature. Fire is inherently dangerous but also is something we all hopefully learn to respect from the time we are young. However, it is difficult to anticipate destructive human behavior, let alone be responsible for it, so I spend much of my time designing for worst-case scenarios.

You were awarded a grant from the National Endowment for the Arts in 2010 for your largest fire feature to date. What did it look like? FIREFEATURES was selected to design and construct a monumental installation, The Bridge, at SteelStacks for the Bethlehem Steel revitalization project. It looks like a tapered arch of American-made Corten steel … an unfinished bridge arcing into the future.

What were the most memorable courses you took at Trinity? George Chaplin’s painting and design classes. He is a treasure. It was less that I became a better artist because of the classes and more that he provided me with the tools to look at art critically and tuned me into collecting art as a passion. He refined my tastes and my eye. Seeing one of his paintings hanging in Austin Arts Center my freshman year was one of the first times I saw a painting that I wanted to live with for the rest of my life. It was his bare manner of teaching and his own work that enabled me to see.

For more about FIREFEATURES and to see many of the projects described here, please visit www.firefeatures.com.