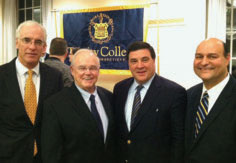 Former football head coach Don Miller was in attendance at the annual football banquet in December. Miller compiled a 174-77-5 record and a winning percentage of .693 from 1967 to 1998 and was named New England Small College Coach of the Year five times (1970,1974, 1978, 1980, and 1993). At the banquet, the Trinity Touchdown Club Award was renamed the Don Miller Touchdown Club Award. The award is given to a non-player who gives of his/her resources to the betterment of the football program.

Mike Foye ’79 presented that award to its first recipient, Paul Romano ’81. Todd Beati ’83 was on hand to present the Offensive Player of the Year Award to junior Evan Bunker, who became Trinity’s all-time leading rusher and workhorse of the 8-0 NESCAC championship team.