In the autumn of 2007, Xiangming Chen arrived at Trinity to become the founding dean and director of the College’s Center for Urban and Global Studies (CUGS), which began that year thanks to a major donation from the Andrew W. Mellon Foundation. Chen brought with him strong credentials—a distinguished 18-year career at the University of Illinois at Chicago and an impressive body of scholarship. He was precisely the sort of leader that the new center, the first of its type at a top liberal arts college in the United States, required.

CUGS is at the epicenter of Trinity’s strategic mission to integrate urban and global education in Hartford and globally. And Chen wasted no time tackling that mission. In November 2008, he convened the new center’s first major conference. It was a two-day program that drew speakers, panelists and participants from all over the region, including 13 prominent scholars from Harvard, Brown, MIT, Yale, and other major universities, plus a large, interdisciplinary contingent of Trinity faculty.

“The Center plays the central role in promoting Trinity’s new strategic initiative of integrated urban and global teaching, research, and engagement on campus, in Hartford, and globally,” Chen wrote in the introduction to the compendium of scholarly papers that were presented at the event. “By organizing this conference and bringing a number of you to campus, the Center is reaching out to develop exchanges and cooperation with scholars and institutions, especially those in the greater New England region that may share a broad research interest in urban and global studies.”

He was doing more than that, however. The collective focus of the conference—Rethinking Cities and Communities: Urban Transition Before and During the Era of Globalization—signaled Chen’s determination that the center would lead, rather than follow, in defining new and innovative ways of thinking about the role of cities in the future of the planet. And the subjects of many of the papers, inspired by that focus, spoke volumes about his vision for the new center, which seeks to balance Trinity’s commitment to international learning opportunities with the College’s commitment to employing Hartford and the region as an experiential learning laboratory. 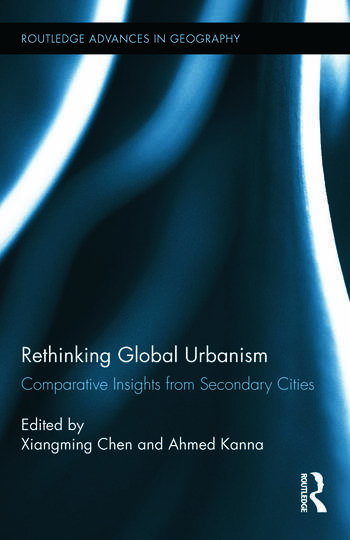 Now, four years later, a book—Rethinking Global Urbanism: Comparative Insights from Secondary Cities—has emerged from that seminal conference. Edited by Chen and Ahmed Kanna, assistant professor in the School of International Studies at the University of the Pacific, the book’s 12 chapters are expanded from papers presented at the 2008 conference.

The importance of secondary cities

Not surprisingly, some papers presented at the conference focused on issues related to the Connecticut River Valley and the historic impact of economic change on Springfield and Hartford. But several papers ranged far abroad, tackling such diverse subject matter as social accountability systems in African cities; the intersection of global politics and community politics in San Francisco’s Chinatown during World War II and the Cold War; the struggle of Black women for land rights in Brazilian cities; and the community-based nature of women’s activism in response to global economic and political change.

Those themes are explored in depth in Rethinking Global Urbanism. “Today cities play a more important role in the connection and organization of global economic activities and everyday activities than ever before,” asserts Chen, “but scholars often do not explore the importance of cities beyond a handful of mega-metropolises. This is a narrow-minded and short-sighted view of the interconnected world of cities. Many secondary cities are playing increasingly stronger roles in the global economy than many people might imagine. They deserve more focused scholarship.”

This innovative re-imagining of the planet’s metropolitan networks reflects “a coming of age within the recent proliferation of comparative urban studies,” wrote Tim Bunnell, associate professor of geography at the National University of Singapore, and James D. Sidaway, professor of political geography at the same institution, in the preface to the book. They added that “…the scholarship assembled in [the book] engages with the global dimensions of the cities in ways which extend beyond the elite, top-down and advanced service and financial sector networks that have predominated in the world cities literature. As such, we believe [it] will inspire others to participate in the exciting challenge of remapping the contours of what it means to be urban in the twenty-first century.”

The work of The Center for Urban and Global Studies is nothing less, says Chen. “It’s the first center of its type at a top liberal arts college in the United States,” he notes. “We have an institutional commitment to international education with a strong urban component. But I want to do more. I want the center to inspire dialogue about urban issues with scholars at other colleges and universities in the region and around the world. When we held the conference in 2008, I wanted to put us on the intellectual map right away.”

Since then the center has flourished, promoting and sponsoring an array of curricular initiatives, research projects and civic engagement activities. Leading philanthropic organizations have collaborated with it to fund those activities. And the first students who’ve had the opportunity to work with Chen at the center have now graduated and gone on to further their education; not without taking along important lessons learned.

In addition to Chen, the book includes chapters by two other Trinity faculty members, Associate Professor Beth Notar of the Anthropology Department and Assistant Professor Scott Tang of the American Studies Program. And several of Chen’s former students left Trinity with a credential few undergraduates, in any discipline, are able to boast, a citation in a significant scholarly book.

Michael Magdelinskas ’11, now a second-year law student at Cornell, was one of three students who contributed to Rethinking Global Urbanism, co-authoring the epilogue, “Second May Be Best—Theorizing the Global Urban from the Middle,” with Chen. A talented singer, who had toured America with traveling productions of Broadway shows before he enrolled in Trinity, he began his undergraduate work as an English major, but added a second major in urban and global studies after a summer spent studying several megacities along China’s Yangtze River between his first and sophomore years.

Still deciding what he wants to do with his career, Magdelinskas says international law is a possibility. But he adds, “I will always be interested in urban globalism, no matter where my career takes me. The Center for Urban and Global Studies had a huge impact on me.”

It’s a perspective shared by Chang Liu ’12, now a law student at Harvard, and Tomas de’Medici ’12, who most recently worked as a field organizer during the Obama campaign. Both characterize the opportunity to do exacting scholarship in collaboration with Dean Chen as an unexpected bonus in their undergraduate experience. Kanna, who was a postdoctoral fellow at the center at the time of the 2008 conference, says editing Rethinking Global Urbanism was particularly meaningful for him. He had completed his graduate work, but he says, “The year I spent at Trinity was enormously important in terms of refining me as a professional.

“The conference was highly interdisciplinary,” he adds. “It was an extraordinary opportunity to engage with people from many different intellectual traditions. We tried to sustain that interdisciplinary approach in the book. Many cities are global even though they don’t fit the conventional view of globalism. If you’re not tracking what’s going on in these cities, which are only ‘secondary’ because they are smaller than the Tokyos and Londons and Shanghais of the world, you’re missing some very exciting trends that have the potential to change the planet in significant ways. I think we’ve captured that in Rethinking Global Urbanism.”