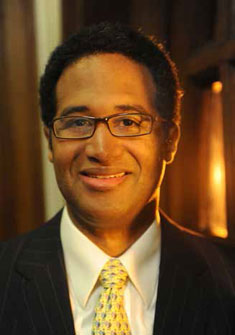 Charles Wallace II ’92 recognizes that alumni volunteerism is a two-way street. While donating time and money provides institutional support for the College, volunteering can also provide avenues for personal fulfillment and growth for the volunteer; or, as he puts it simply: “It helps the school and it helps our brand as Trinity alums.” This philosophy informs ways that Wallace approaches his roles with Trinity’s Black Alumni Organization (BAO) and National Alumni Association (NAA). Through his involvement in these groups, he strives to create opportunities for more alumni to participate in this mutually beneficial exchange.

Before he began formally volunteering with the College, Wallace, who majored in English and received an M.B.A. from the University of Chicago, enjoyed getting together with fellow Trinity alumni at area events in New York City. His consistent activity lead to a greater appreciation of the value of the Trinity network, and he soon decided to push his involvement with the College to the next level.

As president of the BAO, Wallace is working to expand the accessibility of resources to Trinity alums by coordinating new events that are designed to promote career development. He points out that, even if a person has been in the workforce for a while, it is still important to network and learn from successful peers.

Just as crucial to Wallace is setting an example for current students. “It is important that students can also tap into the alumni network early on so that when they graduate they are aware of the wealth of resources available to them and the expectation of giving back,” he said.

In 2012, Wallace worked closely with Trinity’s Alumni Office to create a new BAO-sponsored event that invites prominent black alumni back to Hartford for the purpose of sharing their stories of career success and how Trinity resources helped them with current students and fellow alumni. In October of this past year, Frank Borges ’74—a former Connecticut state treasurer who also served as deputy mayor of the City of Hartford and legal counsel for The Travelers Insurance Company—led the first of these events, which took place in Hamlin Hall on the Trinity campus.

In addition to the career development series, the BAO sponsored a second new event in 2012: a Black History Month lecture that took place in New York City and featured Robert Stepto ’66, professor of English, African American studies, and American studies at Yale University.

Wallace is optimistic that these networking and lecture events can serve as models for what is possible throughout the alumni network, and he is interested in expanding the number of BAO-affi liated programs in regions with large populations of Trinity alumni. He also hopes to foster interaction between BAO and other NAA groups and their respected constituents. “We welcome all alums, and we are completely open to working with other groups and sharing resources that benefit the entire Trinity community,” said Wallace.

Established in 1993, the Trinity College Black Alumni Organization is a subset of the National Alumni Association that is open to all black alumni, faculty, and administrative staff of the College as well as others affi liated with Trinity who support the work of the association. Its purpose is to enhance the undergraduate experience for black students, to establish a closer, more active relationship between the College and its black alumni, and to provide alumni programs of special interest to black alumni.

For more information or to get involved with the BAO, please contact Charles Wallace at cwwallace2@gmail.com, or Abigail Smitka, alumni relations officer at (860) 297-4239 or Abigail.Smitka@trincoll.edu.