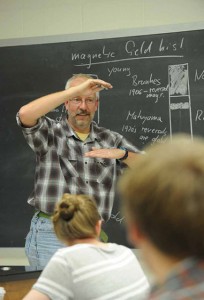 by Mary Howard
Photographs by Nick Lacy
Walk by one of Christoph Geiss’s classes, and you’re likely to hear laughter. “He can relate to just about anyone, which makes it easy for him to crack jokes,” says Emily Kleidon ’14. “Most of the class period, there is someone giggling about something he has said.” Not just a funny guy, though, Geiss, associate professor of physics and environmental  science, “has a knack for pushing students to their fullest potential,” says Jonathan Gourley, a lecturer and lab coordinator in the Environmental Science Program and a frequent collaborator with Geiss. On Thursday, October 18, The Reporter spent the day with Geiss. 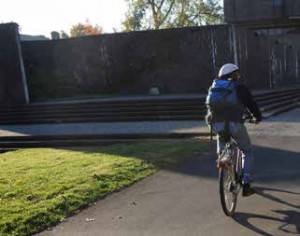 8:30 a.m.
Geiss pedals his ancient mountain bike to campus. The trip takes about 20 minutes. “It’s  the conservationist’s way to get from point A to point B.”

He grew up in Freising, Germany, a small town near Munich and home to the oldest brewery in the world, a fact he is quick to point out. After finishing secondary school, he enrolled at Ludwig Maximilians Universität, where he was literally bowled over by geophysics. On his way to his first advising meeting, Geiss stepped into an elevator and was “run over with a cart full of rocks.” The cart was pushed by the chair of the university’s geophysics department. Geiss was unhurt, but the incident piqued his interest in geophysics. Within five years, he had a master’s in the subject. He earned his Ph.D. in geophysics from the University of Minnesota in 1999 and began teaching at Trinity in 2001. 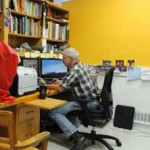 8:35 a.m.
Geiss is planning for his “Introduction to Earth Science” class (ENVS-112), which will take place in a few hours. He enjoys teaching nonscience majors, he says. “It’s a challenge. They’re often deadly afraid of science and scientists.” Since his class may be the only science course these students take at Trinity, Geiss wants to leave them with a good impression, and he wants them to learn something. “He makes the material very accessible and easy to understand,” says Jeremy Rees ’14, an economics and math major who is taking “The Earth’s Climate” (ENVS-112L) with Geiss to fulfill his science requirement. 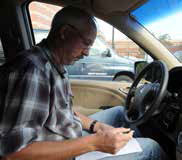 It’s time to pick up a minivan from the College’s facilities management office for this afternoon’s field trip. Geiss is taking his soil science class (ENVS 305) to visit several spots in the Connecticut River valley. He loves field trips. In addition to local excursions, he’s taken students to southern Utah and Iceland. The main purpose of the trips is to expose students to different environments and landscapes, he says, and to explore “the ways humans fit into those landscapes.”

On a recent trip to Iceland, Geiss took his group, including President Jones and members of his family, on a five-day overnight hike. “On the trips, students entertain us with nightly campfire talks based on their work throughout the semester,” he says.

Colby Tucker ’09, a science teacher at the Pomfret School, accompanied Geiss on three of these trips, two to Iceland (2008 and 2010) and one to Utah (2007). “I always wanted to hike with him so I could ask questions when we stumbled upon something interesting,” he says. Tucker says he is a teacher today because of Geiss’s example. “I aspire to do with my students what he did with me.” 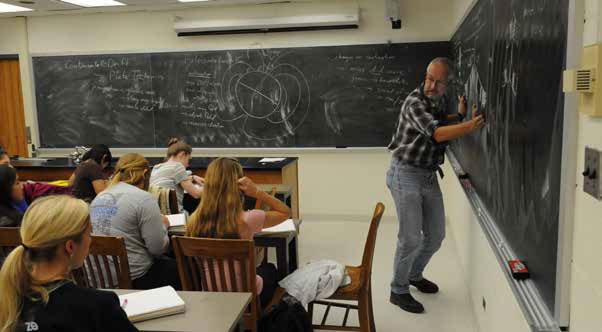 10:50 a.m.
Today’s lesson is on paleomagnetism, the magnetic properties of soils and sediments, and how it helped initiate a paradigm shift to establish plate tectonics as the leading theory in geology. Heady stuff, especially for non-scientists, but Geiss’s lively teaching style has the class enthralled.

“There is nothing worse than 20 kids giving you that ‘look’ that says, ‘Professor, I would rather be anywhere than in your class.’ I avoid that look at all costs. It’s important to live it up a little, ja?” Geiss retains traces of a German accent and that well-placed “ja” frequently punctuates his comments.

12:15 p.m.
Geiss is planning this afternoon’s field trip with Kip Kolesinskas, a conservation scientist with the Connecticut Farmland Trust who will lead the trip. Simon Bunyon ’13, a student in Geiss’s soil science class, joins them for lunch. 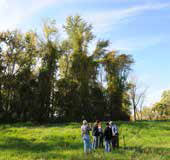 Geiss is at the wheel of the van, driving Kolesinskas and students Bunyon, Renee Swetz ’14, Billy Watts ’13, and Daniel Chow ’13 to Dinosaur State Park in Rocky Hill. The purpose of the trip is for the students to get a first-hand look at various Connecticut soils and explore the relationship between these soils and agriculture. 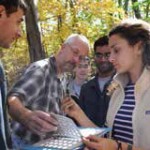 The group then takes a ferry—the oldest continuously running ferry in the country—across the Connecticut River from Rocky Hill to Glastonbury to examine floodplain soils. At Belltown Orchard, the students learn about the unique geological and climatic conditions that make this region so well suited for orchards. At the end of the trip, everyone enjoys freshly baked apple cider donuts.

“These trips can be deep and philosophical, but we also have a lot of fun,” says Geiss between bites.

4:10 p.m.
Geiss heads home to join his veterinarian wife and two sons, ages six and eight, for dinner. Some nights, Geiss takes his children to Williams Rink in Trinity’s Koeppel  Community Sports Center to watch the women’s ice hockey team. He is the faculty liaison to the women’s ice hockey and tennis teams, and he and his sons attend as many games and matches as they can. “He is by far our number one fan, along with his two sons,” says Kleidon, an ice hockey player. “He will sit on our bench and cheer on our practices, and before games he is sure to be there to get us pumped up.”

The boys are in bed, and Geiss heads back to Trinity. He’s working on research in the lab, running soil samples for a colleague from Mexico. On Wednesdays and Fridays, he leaves campus early to take care of his children. “So I make it up on Thursdays.”

His current research projects include investigating the carbon budget in the Arctic wetlands and determining erosion and soil formation rates in the Midwest. A good deal of the earth’s readily accessible carbon is stored in wetlands and soils, he explains. With collaborators from Bowdoin and St. Olaf College, Geiss is trying to uncover how these carbon reservoirs react to, and influence, our changing climate. Each semester, he also supervises up to five or six research students. 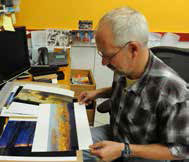 After a long day, Geiss is finally ready to go home. With a full schedule of teaching, writing, and research, he has little time for hobbies. He loves photography, though, and brings his camera on all his field trips, as well as to most of the women’s tennis matches and ice hockey games. Many of the women’s ice hockey photos on the Trinity Web site were taken by him. Despite the hour, he is cheerful. “I like what I do,” Geiss explains “I never have to drag myself to work.”