DEGREE: B.A. in theater and dance, Phi Beta Kappa; M.A. in teaching from Manhattanville College
JOB TITLE: Professional singer, actress, and voice-coach; long-time collaborator with Trinity Professor of Music Gerald Moshell
FAVORITE TRINITY MEMORY: I met my husband, Thomas Madden ’86, doing a show at Trinity under the direction of Gerry Moshell. It was Gilbert and Sullivan’s Ruddigore. I was cast as the madwoman, and Tom was cast as a knight in shining armor—it has kind of been a metaphor of our relationship ever since! We’ve been married for 16 years and have three children, and I can think of countless other couples who met on stage at Trinity.

REPORTER: How did you become involved in music and theater?
MADDEN: I have known that I wanted to be an actress since I was a little girl. My grandmother was a singer and a graduate of Vassar College, and my mother is an actress and also a graduate of Vassar. I broke the mold and came to Trinity, and I’m so glad I did. I was in over 16 productions—both dramatic and musical theater—and gained tons of experience. At other schools, you can’t even get on stage during your first year. Most important to me was my relationship with my professors, particularly Gerald Moshell. His constant support has sustained me in tough times during my professional journey, and my successes have largely been because of his faith in me.

REPORTER: How has your relationship with Gerry Moshell changed over the years?
MADDEN: I auditioned for Gerry within days of arriving at Trinity, and I was cast in the fall musical revue. It wasn’t until later when I started working professionally that I realized that Gerry’s students are his family. He pours a tremendous amount of his knowledge and energy into his students, and he makes an effort to nurture these relationships long after they graduate. While I was working in New York and regional theater Gerry would come to support me in many professional productions. For example, in September 2009 at the Summers End Concert he sat in the front row with my family when I was the featured soloist with the Rhode Island Philharmonic. 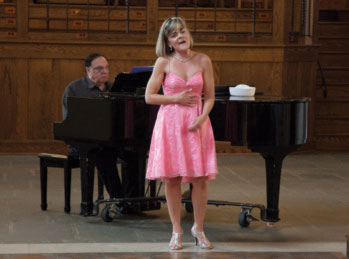 I moved to Rhode Island about a decade ago with my husband, Tom Madden ’86, who practices law in Providence and teaches ethics at Providence College. A few years after, Gerry also moved closer to Rhode Island. Our proximity to each other has afforded us more opportunities to collaborate. In the past five years, Gerry and I recorded two CDs together, Phoebe Sings Broadway (2008) and Phoebe in Love (2011). I am proud of these recordings. We also have performed a series of concerts at The Towers in Narragansett, RI, called Broadway at the Towers: Phoebe Madden and Friends, which involved other Trinity alums—Patrick Greene ’07, Devin Romanul ’07, Michael Ersevim ’91, and [William] Lee Goldman ’91. In June 2012, we had the joy of performing a concert together at the Chapel during Reunion, which marked Gerry’s 35th year at the College. At the end of the concert my student, Rachel Rossetti, joined us for the encore. She is now a performing freshman at Trinity and Gerry is her adviser. It feels like a full circle.

REPORTER: What do you take away from your collaborations with Gerry?
MADDEN: At Trinity, Gerry taught us about work ethic, respecting the process and actually learning the material, being prompt and focused, and having high standards. He leads by example. Not everyone receives that kind of training at a liberal arts college. With the transient lifestyle of an actress, it has been immeasurably helpful to have a long and enduring relationship with my professor. He’s also the best in the business. I speak for many when I say that Gerry is a brilliant accompanist. I’ve trained with amazing people on Broadway, but Gerry listens and follows in such a way that there is complete trust. As a singer I try to trust my instincts and take risks, and that is easy for me to do with Gerry at the piano because I know that he will be right with me. It allows us to really interpret a song.

REPORTER: As a teacher yourself, what wisdom do you try to pass on to your students?
MADDEN: You have to be well-rounded to be successful. Don’t just focus on one thing, but learn to do it all—sing, act, dance, write, etc. The more strings to your bow, the more opportunities you will be able to take advantage of later. Another important point is to respect the collaborative process. Have respect and love for your mentors and your peers. Theater at its best can be the most ensemble-oriented kind of work I can think of. Lastly, it is essential to trust yourself.

REPORTER: Are there any new professional areas that you would like to pursue?
MADDEN: I am actually starting a new leg of my career. I recently became involved with the Greenwich Odeum in Rhode Island, a theater that is about to reopen at the beginning of 2013. I’m on the planning committee of the Odeum, which means that I will not only perform at the theater but also be a part of its leadership. This is a very exciting time for us because we will mount and host an array of productions: classical pieces, musical theater, folk, rock, Irish, etc. We are all big believers in celebrating new pieces in American musical theater and appreciating a mix of styles and genres. I hope to involve to more Trinity alumni in the theater as we move forward. Moreover, on our upcoming opening night gala, Gerry will rush to Rhode Island from his day-long rehearsals at Trinity to accompany me in an original number for an eight o’clock curtain. We wouldn’t have it any other way.

To see Phoebe’s performance schedule or purchase her CDs, visit:
http://facebook.com/pages/Phoebe-Madden/453234468068085 or contact her directly at phoebe.madden@verizon.com.