My high shool and Trinity College are polar opposites. My high school was primarily people of color, liberal, and non-affluent. Trinity College is a predominately white, conservative and wealthy institution. In several ways, coming to Trinity was a reverse culture shock. I was always aware of race; it was a topic of discussion amongst my friends in high school and with family members. However, when I came to college something was different. The conversation of race had changed. The democratic opinions of my open-minded high school peers were now harsh conservative slurs from provincial aristocrats. So in order to stay in the racial conversation I signed up to take the first year seminar “Color and Money”, which was about race and social class at Trinity College.
Since taking that course my thoughts of racism have not changed, but my awareness of racism has increased. An example of the racial tension at Trinity that stuck with me happened about one month ago. The cultural houses wanted to show signs of solidarity with schools that had been targeted with racial prejudice, and one of the actions we took was making a BLACK LIVES MATTER banner and hanging it from the beautiful chapel. 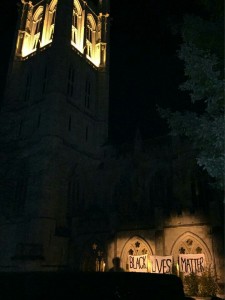 Approximately two days later the part of the banner that said BLACK went missing. The sign hanging from the chapel now read LIVES MATTER which was synonymous to the hashtag #AllLivesMatter on social media, created by white people in contrast to the black lives matter movement and the hashtag #BlackLivesMatter. The action of removing the BLACK from the banner was a message to the students of color at Trinity that rang as clear as the bells from the chapel- We don’t matter. 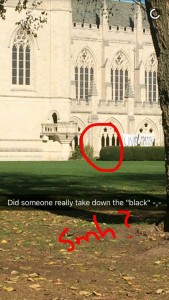 This experience of passive racism shocked me. This vandalism quickly reminded me that this was no longer high school and I was no longer the majority. Trinity College was a completely new, and very different environment and I had to adjust. After the vandalism on the chapel, I started to get very radical ideas about white people and racism. Race ruled my thoughts. I could not experience anything without thinking that race was playing a factor in the situation. I needed an outlet. I began participating in the cultural houses events to discuss this event and other racial topics. The discussions were interesting, but very one sided. Most of the people that would come to these cultural events and discussions were the students of color, and the few white students in attendance would seldom share their opinions. I needed an open forum where I could hear the voices of white students to help myself understand how racism works on the other end of the spectrum. I thought I had found those voices in the students of my first year seminar.

I went to all of my first year seminar classes ready to listen to the white student’s opinions. Every class I hoped to hear some sort of take on race from the white students, but all I heard was a deafening silence that reiterated a point that Beverly Tatum made in her novel, Why Are All the Black Kids Sitting Together in the Cafeteria?, the majority never has to explain. It is the people who absolutely cannot avoid race (people of color) who always have to explain and discuss their situations because what they are not perceived as normal.

My seminar was no different than the discussions held by the cultural houses. The conversation in class was dictated by the students of color constantly sharing their opinions, and then there was the occasional white student who shared their opinion. This to me was very discouraging and drove me to more radical thoughts on the progression of racism in our society. Being in a predominantly white environment really drove home the notion that if white people can avoid the topic of race, they will.

Just as I was about to lose all hope on the majority of white students in my class and at Trinity College a white student, who will be referred to as Timothy, in my first year seminar shared his experience with race. Earlier in the semester my entire first year seminar went to a walk out held by the cultural houses. The walk out was an event that was an open forum where students could share their experiences with race on Trinity’s campus. At the walk out they handed everyone an index card and told them to write down an instance of racism that they have experienced on Trinity’s campus. Then, you could have either put the notecard in a jar or read it aloud for everyone to hear. None of the experiences shared were positive.

About a week after the walk out we were in class talking about what we were going to write about for our final papers. Timothy then spoke about his reaction to the walk out. He said that when they asked everyone to write down an experience of racism at Trinity he had nothing to write about. Then, he looked around and saw that every person of color was writing something down, and other white students were looking around because they had nothing to write either. He then he said he realized that in that moment he was the minority, and that this must be how people of color feel almost every day. Then, he spoke about a student named Shawn who shared his experiences on racism. At one point during the time Shawn was sharing, Shawn spoke, in a mocking tone, about a stereotypical Trinity guy (A guy from “just outside of Boston”, drives a very expensive car, wears vineyard vines, wears Patagonia’s, and Sperry’s) and how that stereotype did not in any way apply to him. Timothy said that when Shawn spoke about that stereotype he realized that he had been describing him, and that he felt attacked because he was being generalized by the stereotype of a Trinity guy. He then said he came to the realization that this must be how people of color feel every day. He finished his story by saying that he never would have seen race this way if he did not take this seminar and was forces to go to that walk out. After Timothy had finished his story inspired other white students to share similar stories.

Work Cited
Beverly Daniel Tatum, “Why are all the Black Kids Sitting Together in the Cafeteria?” and Other Conversations about Race, revised edition (New York: Basic Books, 2003).