Diet-Based Epilepsy Therapy May Offer Hope for Children with Autism 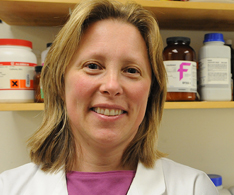 A dietary therapy known to be highly effective at reducing epileptic seizures may independently reduce behaviors associated with autism spectrum disorders, new research on mice has shown. The high-fat, low-carbohydrate food regimen, known as a “ketogenic” diet, has been prescribed to treat epilepsy patients — most often in children — for nearly 100 years.

Research in recent years has suggested that the diet may benefit neurological conditions besides epilepsy, including neurodegenerative disorders. However, these new findings provide the first translational evidence in an established animal model that a ketogenic diet can reverse multiple symptoms that characterize a developmental disorder such as autism.

The research was conducted by an international team of scientists, led by Susan Masino, professor of psychology and neuroscience at Trinity College, and published in the June 5 issue of the open-access peer reviewed journal, PLOS ONE (http://dx.plos.org/10.1371/journal.pone.0065021). Researchers at the Legacy Research Institute in Portland, OR; at the Jikei University School of Medicine in Tokyo, Japan; and at the University of Calgary in Alberta, Canada, contributed to this work.

“Although treatment strategies for children with autism spectrum disorders are under development, the ketogenic diet is available now and could offer multiple benefits,” Masino noted. “For example, children with autism and uncontrolled seizures have few options, and this research suggests a ketogenic diet could reduce seizures and improve behavior.”

It is well established that autism rates are increasing, and are now estimated at 1 in 88 children. Currently, there are no biologically validated treatments for autism’s core symptoms of poor social behavior and communication and restricted interests. Although dietary approaches for treating autism are not uncommon – for example, a gluten-free, casein-free diet remains popular – none of these special diets have proven to be effective in controlled clinical studies. Furthermore, most available medical treatments address co-morbid conditions, such as anxiety, seizures and aggression rather than the core behavioral symptoms that result in an autism diagnosis.

A ketogenic diet is administered under medical supervision and was developed based on the historical observation that fasting reduces seizures. Because of very restricted carbohydrates and limited proteins, the ketogenic diet forces the body to use fat rather than glucose as an energy source and thus produces a metabolic state similar to fasting. Ketogenic diets have been used successfully to treat epilepsy in people since 1921, and can sometimes stop seizures when drugs are ineffective.

A small study a decade ago demonstrated that some children with autism on an intermittent ketogenic diet experienced a significant reduction in autistic symptoms, but this initial work did not lead to controlled clinical or animal studies. Masino and her colleagues have been studying the ketogenic diet for a variety of neurological disorders, and working on hypotheses that the anti-seizure molecule, adenosine, may be key to the diet’s effects and may also be helpful in alleviating symptoms of autism.

Masino and her team tested the behavioral effects of a ketogenic diet using a model known as the BTBR mouse, a mouse strain that shows multiple characteristics of autism, including low sociability, poor perception of social cues and highly repetitive behaviors. As expected, the group confirmed that BTBR mice fed a normal diet displayed behavioral symptoms of autism.

“Together, these behaviors represent the complement of core symptoms used to diagnose autism, and all were reversed by the ketogenic diet,” said Masino.

Because seizures are common in persons with autism spectrum disorders, it was important to determine if the effects of the diet were related to the ketogenic diet’s well-known ability to treat epilepsy. Based on a battery of tests, including EEG recordings and evoked seizures, the researchers found that the BTBR mice do not have epilepsy, and are not generally vulnerable to seizures. Therefore, the behavioral effects of the diet are independent of its anti-seizure effects.

Based on previous research on the ketogenic diet and on the causes of autism, multiple possible cellular changes may underlie these behavioral improvements. In addition to Masino’s hypothesis regarding adenosine, inflammation is emerging as an important factor in causing autism: a general decrease in inflammation due to the ketogenic diet could underlie its effectiveness against autistic symptoms. In a prior paper in PLOS ONE, Masino’s laboratory showed for the first time that a ketogenic diet can reduce inflammation in rats. Inflammation, adenosine, and other possible mechanisms are under investigation by several research groups.

At this time, with increasing prevalence and few treatment options, new treatment strategies for autism are needed. Based on these findings, additional research on the ketogenic diet may offer clues to reversing symptoms of autism.

Added Masino: “We hope this research draws attention to ketogenic diets as a promising, non-pharmaceutical treatment for children with autism spectrum disorders. These diets may be particularly useful for children with autism and co-morbid uncontrolled seizures. This is a clinical population known to have particularly poor outcomes. If other treatments are not working, a ketogenic diet should be offered as an option.”

For more information, please contact Masino at susan.masino@trincoll.edu or at 860-748-7746.

Founded in Hartford, CT, in 1823, Trinity College is an independent, nonsectarian liberal arts college with more than 2,300 students from 47 states and 54 countries. It is home to the eighth-oldest chapter of Phi Beta Kappa in the United States. The faculty and alumni include recipients of the Pulitzer Prize, the MacArthur award, Guggenheims Rockefellers and other national academic awards. Trinity students integrate meaningful academic and leadership experience at all levels on the College’s celebrated campus in the capital city of Hartford, and in communities all over the world.