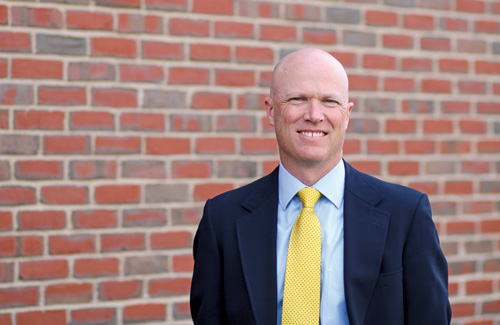 In an October 2017 announcement to the Trinity campus community about Galbraith’s appointment, Dean of Campus Life and Vice President for Student Affairs Joe DiChristina and President Joanne Berger-Sweeney noted, “Drew’s depth of experience, his coaching and teaching philosophy, and his understanding of and admiration for the role of athletics at Trinity College made him a truly exceptional fit.”

At Dartmouth, Galbraith helped lead a comprehensive athletics program of 35 varsity teams, 33 club sports, and 24 intramural sports. He served as sport administrator for the Dartmouth Big Green football program, as well as for women’s rugby and men’s and women’s cross country and track and field. Over the years, Galbraith served as sport administrator for 13 other teams at Dartmouth, overseeing coaches and all aspects of their programs. He also served on several NCAA committees and as a liaison to health professionals who worked with student-athletes.

“Trinity has a tremendous reputation, and I am humbled and honored by the opportunity to lead the athletics program and serve the college’s mission,” Galbraith said in October.

Galbraith earned both a bachelor’s degree and a law degree from the College of William & Mary. He began his career in media relations and broadcasting at Virginia Commonwealth University, and he joined Dartmouth in 2004 as associate director of athletics after serving in compliance roles in the athletic departments at William & Mary and at the University of Nebraska Omaha.

Galbraith’s appointment followed a national search conducted after the resignation in June 2017 of Michael Renwick, who had served as Trinity’s director of athletics since 2010.