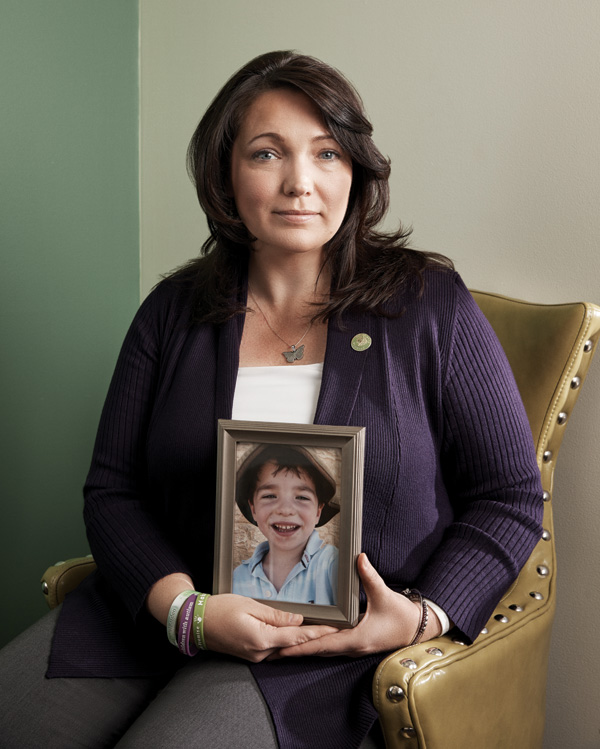 Nicole Hockley ’92 holds a photo of son Dylan, who was killed in the tragic shooting at Sandy Hook Elementary School in December 2012.
Photo by Eric Ogden

Before December 14, 2012, Nicole Moretti Hockley ’92 had not intended on dedicating herself to preventing gun-related deaths. But the course of her life was changed forever on that day, when her 6-year-old son, Dylan—along with 19 other children and six adults—was killed by a gunman inside Sandy Hook Elementary School in Newtown, Connecticut, in one of the deadliest school shootings in U.S. history.

“Dylan was the glue for our family. We just called him pure love,” Hockley says of her son. “He was autistic, so he had challenges with communication and development, but unlike many children on the spectrum, he really enjoyed deep, firm cuddles. He adored his big brother, Jake, and he played with the kids in our neighborhood. He was just a very good boy.”

Hockley’s immense grief quickly morphed into action. One month after the tragedy, Hockley joined co-founders Tim Makris and Mark Barden—whose son Daniel also was killed—and gathered others impacted by the violence to form Sandy Hook Promise (SHP), a national nonprofit organization that works to prevent gun-related deaths of children due to crime, suicide, and accidental discharge. “After tragedy, people come together, and they want to do something that makes a difference. I felt that this was a platform I could lend my voice to and make some positive change,” she says. “I didn’t want other families to experience what I had experienced. I didn’t want another mother to lose her child.”

SHP’s intent is to honor all victims of gun violence by turning the Sandy Hook tragedy into a moment of transformation by offering programs that protect young lives. “Dylan’s voice is gone, his future is gone, and there’s so much pain, but there has to be something we can do to create something positive from this, to create his legacy,” Hockley says. “When I say the job is 24/7, I’m not exaggerating. … It’s incredibly personal to me.” 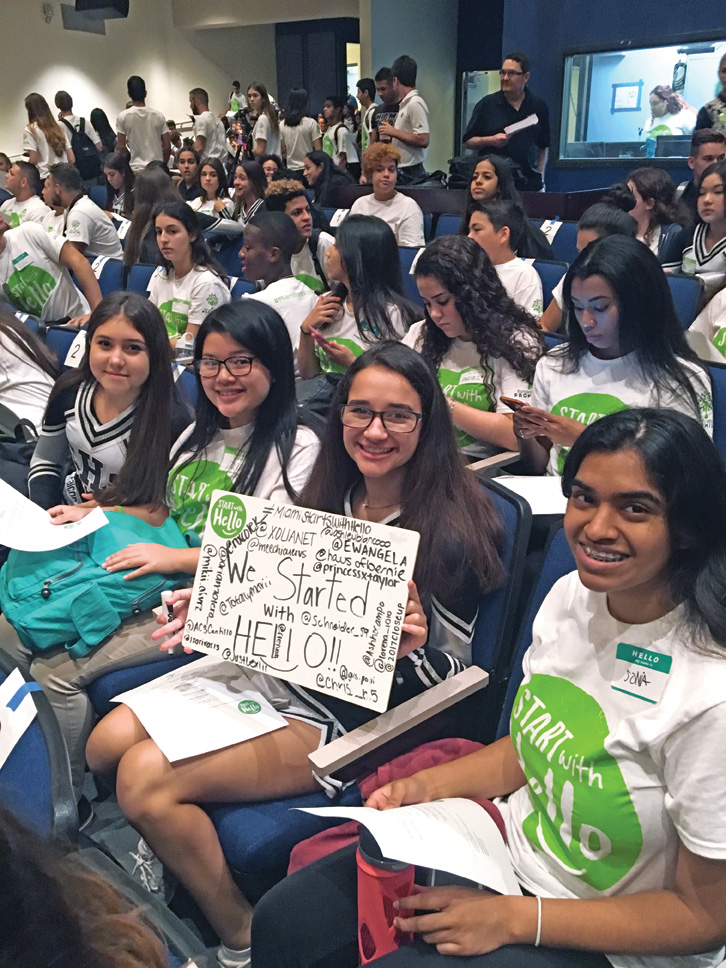 SHP offers a suite of educational programs—with a focus on youth—that teach how to recognize the signs of a person who is at risk of hurting themselves or others, as well as how to intervene effectively. “Start with Hello” helps middle and high school students learn the signs of chronic social isolation, which Hockley says is a leading sign of someone who could commit an act of violence. “Say Something” focuses on teaching teens to recognize at-risk behaviors through the lens of social media and to seek the help of an adult. Additional programs emphasize the warning signs of suicide and evaluate whether schools are taking the proper steps to prevent violence.

“These acts of violence are preventable when you know the signs,” Hockley says. “We’ve trained 2 million kids and adults in all 50 states to know the signs and the tools to report them, we’ve helped to reduce bullying and other forms of victimization, and we’ve gotten hundreds of kids the mental health help they need.” All of SHP’s programs are offered at no cost. “We don’t want money to ever be a barrier to saving a life,” Hockley says. Instead, the organization is supported primarily by donors.

SHP employs a staff of about 30, mostly based in the Newtown headquarters, with others in California, Ohio, Florida, and Washington, D.C., and a team of “Promise Presenters” who travel the country to deliver the programs in person. As one of SHP’s three managing directors, Hockley is focused on marketing and communications, program development, and digital fundraising. She also serves as the media spokesperson and conducts seminars and speaking engagements. 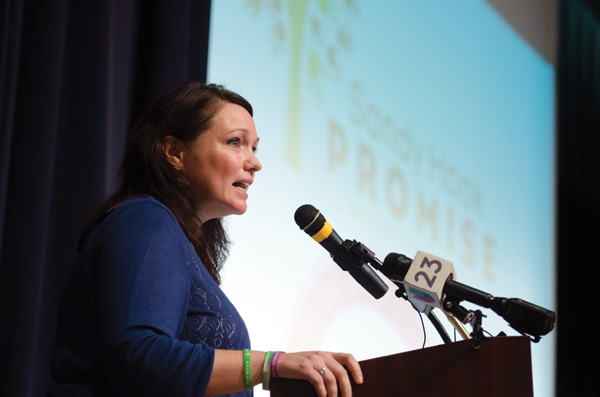 Hockley says that her B.A. in English and theater from Trinity College helped drive her career in marketing and now helps in her work at SHP. “I am able to use my skills by crafting messaging and writing in a way that motivates someone to do something and informs them correctly,” she says. One way to become more informed about the issue of gun violence, Hockley says, is by agreeing to the Sandy Hook Promise at sandyhookpromise.org and by reading the website for ways to get involved. “It’s growing fast, and we need all the help that we can get,” she says.

Hockley’s partners say that her passion plays a large role in the rapid growth that SHP has experienced. “Nicole’s strength, heart, and soul have been poured into creating programs that stop someone before they hurt themselves or others,” Makris says. “By 2026, she will have helped 26 million youth and adults, truly changing an entire generation.”

Makris adds that Hockley is one of the most dedicated individuals he has ever known. “Every time a challenge is in front of her that slows progress, she regroups and finds a way around, over, or under it,” Makris says. “Grief, trauma, and horror strike too many parents and community members each and every day. I believe that Nicole is showing that out of tragedy can come transformation, that you can create change that honors those lost and protects those who are here with us today. She is on a mission to create change and to honor her son, Dylan. She inspires all of us to do even more.” 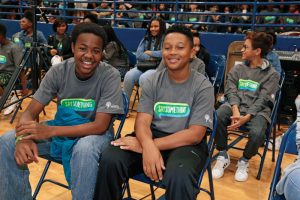 Students at Olde Towne Middle School in Ridgeland, Mississippi, participate in the Sandy Hook Promise “Say Something Week” in October 2017. The event was funded by a mini-grant from the Allstate Foundation for the school’s Students Against Violence Everywhere (SAVE) Promise Club. Photo by Brad Smith/PBSMITH IMAGING

This mission is what Hockley considers to be her life’s work. “This isn’t what I chose to do,” she says. “Obviously I never would have chosen for what happened at Sandy Hook to happen. But this is what I will be doing for the rest my life: teaching others to prevent tragedies where they live.”

For her work, she was honored by Trinity with its 2017 Alumni Achievement Award, with her citation noting her “courage, hard work, and selflessness.” She also was recognized in 2016 by People magazine as one of its “25 Women Changing the World,” yet that’s not exactly how she sees it. Her motivation lies closer to home.

“I see myself as someone who wants to make a difference, and the reason I do that is because of my son who is no longer living and my son who is still surviving,” Hockley says. “I’m not trying to change the world; I’m just trying to help save lives and to make sure other people don’t have to walk in my shoes.”

“I promise to do all I can to protect children from gun violence by encouraging and supporting solutions that create safer, healthier homes, schools, and communities.”